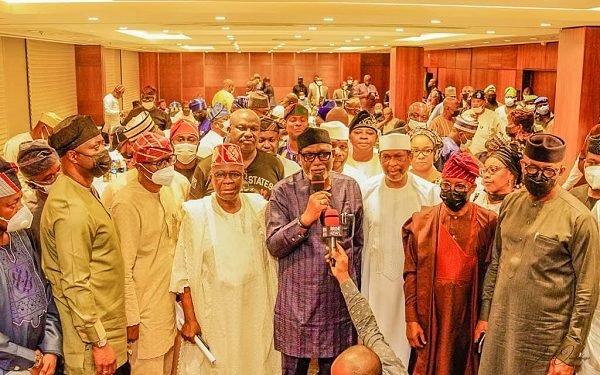 The details of the meeting between the South-West governors and federal lawmakers from the region have emerged.

TrackNews Online gathered that the meeting which was held at the Transcorp Hilton Hotel, Abuja started at 8.10 pm, and was presided by the Governor of Ondo State and Chairman of the South West Governors Forum, Rotimi Akeredolu.

Speaking to reporters after the meeting, Akeredolu said the governors and lawmakers deliberated on the amendment of the constitution and the passage of the Petroleum Industry Bill (PIB),

The governor however disclosed that the leaders have set up a committee to harmonise the region’s position on the ongoing constitution amendment.

He said: “We deliberated on constitutional amendments and we have resolved that we will present a common position as regards amendment to the constitution.

Recall that the Southern governors at a meeting in Lagos on Monday demanded that the presidency should return to the south after President Muhammadu Buhari concludes his tenure in 2023.

According to a communique released by the governors at the end of the meeting, they also rejected the 3% clause inserted in the Petroleum Industry Bill (PIB) recently passed by the National Assembly.

They however commended the lawmakers for passing the bill.

Related Topics:Details Of Meeting Between S/West GovernorsLawmakers Emerge
Up Next