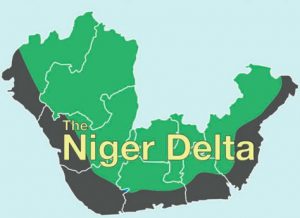 The leadership of Peace Development, Security and Humanitarian Rights Association of Niger Deltan has advised President Muhammadu Buhari to desist from pushing the Niger Delta people into declaring a Niger Delta Republic due to failure to meet the various demands of the region.

The President of the group, Comrade Mike JK Tiemo, gave the warning in Warri, Delta State, stressing the need for the President Buhari-led administration to be open to constructive criticisms and recommendations which could truly move Nigeria forward rather than calling the bluff of people clamouring for a better standard of living.

Comrade Tiemo posited that the Federal Government’s disregard and failure to implement the 16-point agenda of the Pan Niger Delta Forum (PANDEF) and the demands of other Niger Delta agitators was nothing but an indirect invitation to chaos and anarchy for the country.

Tiemo noted that the blunt refusal of the Federal Government to heed the necessity of restructuring, failure to establish industries, factories and modular refineries to check the nagging problem of the subsidy policy in the petroleum industry was unacceptable.

He insisted that the request of the South-South governors on issues that can lift Nigeria out of the woods should not be swept under the carpet just to satisfy the appetite of a few bent on mortgaging the destiny of the country.

According to him, the National Assembly should look into the passed PIB as requested by the host communities of the Niger Delta, just as he lamented the refusal of President Buhari to release the gas flare fines to Niger Deltans who bear the brunt of the menace.

He, therefore, appealed to President Buhari to have a rethink on his current posture in the affairs of nation.

“Sir, please listen to our national leaders like Chief E.K. Clark, other stakeholders and humanitarian groups who are speaking on behalf of the Niger Delta people for peace and tranquility to prevail in our dear country.

“I strongly suggest that 10 per cent PIB request should be expressly granted to the host communities without any delay, the oil companies should relocate their operational headquarters to the Niger Delta as directed by Vice President Yemi Osinbajo because it is more profitable for us as a nation for President Buhari to avoid anything that will create a vacuum for unintended disruption of oil companies operating in the Niger Delta region,” he pleaded.

YOU SHOULD NOT MISS THESE HEADLINES FROM NIGERIAN TRIBUNE

In spite of the huge investment in the water sector by the government and international organisations, water scarcity has grown to become a perennial nightmare for residents of Abeokuta, the Ogun State capital. This report x-rays the lives and experiences of residents in getting clean, potable and affordable water amidst the surge of COVID-19 cases in the state…

The Lagos-Ibadan railway was inaugurated recently for a full paid operation by the Nigerian Railway Corporation after about a year of free test-run. Our reporter joined the train to and fro Lagos from Ibadan and tells his experience in this report…

Related Topics:Don’t push us into declaring N’Delta Republicgroup warns Buhari
Up Next

Again, Akpabio in the Eye of the Storm –