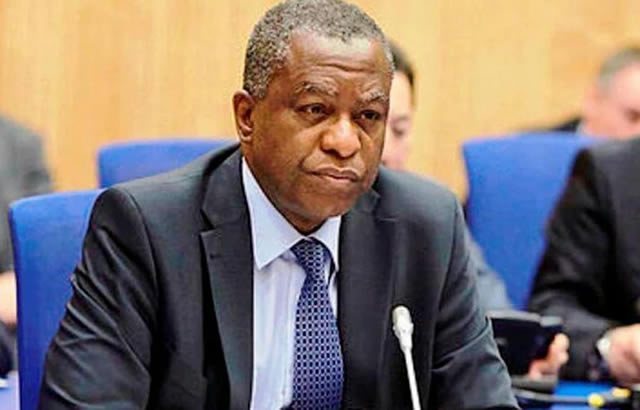 There was a mild drama Sunday in Enugu when Operatives of a private Security outfit hired by Minister of Foreign Affairs, Mr. Geoffery Onyeama during a Stakeholders meeting of, Enugu West Senatorial zone, bounced back and manhandled some top officials of the Buhari Support Group (BSO) and other Chieftains of the All progressive Congress APC, from the district who came for the meeting.

The said controversial meeting, convened by Onyeama, at the Dome event Centre Enugu, witnessed heavy presence of both armed and unarmed security men.

Aside the APC officials, most Journalists who came to cover the event, including our Correspondent were equally barred from entering the venue by the stern looking private Security men, who said they were acting on instruction from the convener.

The Security men, clad in black uniform who were hostile to the APC Chieftains and the Journalists, said no amount of shout will make them allow any body who do not have the special WhatsApp invitation from the Minister’s personal Assistant, Mr. Flavour Eze into the venue.

Addressing newsmen on their encounter, the Enugu state Chapter Secretary of BSO, Barrister Godwin Onwusi, and a Chieftain of the APC from Ezeagu Council area of the state, Barrister Okenna Agubuzor, who were among the party Stalwarts to be bounced back described the Minister’s action as “shocking and terrible.”

Onwusi said: “I went there, I saw heavily built bouncers, about ten of them at the gate, and they said I should show them the massage inviting me for the meeting. And I told them the Minister invited leaders of the party from Enugu West to the meeting, that having served this party since 2011, that I am one if the leaders of the party.

“I got to the place only to be told that I am not one of the leaders invited, and coincidentally, the people am seeing there are the people who came into the party in 2015, after president Buhari had won the election, including the Minister himself and his PA who determines whom to invite

“Certainly, that meeting is unknown to APC constitution. it’s just a meeting if friends if the Minister’s who are members of the party.

“There are organs of the party, some Chairmen of the party at local government levels from Enugu West of the zone, were also bounced, so whatever decision they are reaching there, is their own cup of tea, because they have freedom of Association .

“The president has told us that the during the forthcoming congress, the party will recruit leaders of the party through bottom top approach.”

In his reaction, Barrister Agubuzo, said the meeting has shown that the convener is “politically shallow in his thinking”, stressing that such action of the Minister had been responsible for the political woes of the APC since he joined the party.

“When you are organizing this type of meeting, and scheduling who should attend, you have to be very careful.

Agubuzor said, “I respect the Minister, but this is exactly how not to operate as a politician. In politics, you need people, especially those at the organizational level (wards and LGA), insisting that excluding leaders and key Stakeholders from such a meeting is counter productive.”

Also reacting, Secretary of the APC in Udi Council Area of the state and a member of the state Caretaker working Commitee, Mr. Felix Ebubeagu said he was surprised that he was bounced back by unidentified security operatives.

He pointed out that with his position, he was entitled to attend the meeting without being embarrassed.

According to Ebubeagu, “it was unfortunate that I was bounced back by the unidentified security men”, adding that this is not the norm in the party.

He noted that what happened was repeat of the mistakes that the minister of foreign affairs, Geoffrey Onyema and his cronies have been making in the past which have been dragging the party backwards.

“What we have here is mobilization of unknown people to scatter APC in Enugu State. There is no way that you can call a meeting of this nature without inviting a secretary of the party in the zone.”

Other Chieftains of the party who were barred from entering the meeting venue included, a pioneer APC Chairman in Ezeagu Council area and State Ex- officio, Sunday Ezeji, BOS Coordinator, Ezeagu, Ogwudike Onworah, a State Chairmanship Aspirant, Hon. Chiedozie Nwafor among others.

Efforts to get the reaction of the minister through his PA, Flavour Eze, yielded no result as he failed to respond to the SMS sent to his mobile phone.