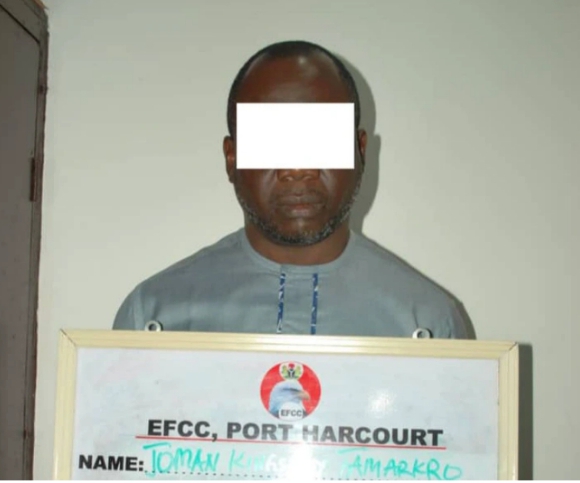 The three suspects, identified as Great Johnson Philip, Adegoke Alaba Bright and Joman Kingsley Tamarkro, were arraigned before Phoebe Ayua, justice of the federal high court in Port Harcourt, on an 11-count charge bordering on conspiracy and obtaining money under false pretence.

Wilson Uwujaren, EFCC spokesperson, in a statement on Tuesday, said the defendants allegedly defrauded and obtained the sum of N88,855,000 from Robag Marine and Offshore Logistics Limited.

“The defendants’ trouble began when a petitioner alleged that, sometime in September 2020, he instructed his account officer in one of the new generation banks, to source for US dollar equivalent of the sum of N88,855,000 in any reputable bureau de change firm,” the statement reads.

“He was allegedly introduced to one Fewei Young Noel of Finotel Multiservice Limited, who agreed to undertake the transaction for him. The funds were allegedly sent to the firm, but neither the funds nor their dollar equivalent were returned to him.”

According to the EFCC, the defendants had promised to pay $201,000 as equivalent for the sum, but failed to do so for months.

“That you Great Johnson Philip, Adegoke Alaba Bright and Joman Kingsley Tamarkro, sometime in 2020, at Port Harcourt, within the jurisdiction of this Honourable Court, with intent to defraud, obtained the sum of Eighty-Eight Million, Eight Hundred and Fifty-Five Thousand Naira (N88,855,000) from Robag Marine and Offshore Logistics Limited on the representation that you will transfer a Dollar equivalent of Two Hundred and One Thousand United State Dollars ($ 201,000USD) to wit: a pretence which to your knowledge was false and thereby committed an Offence contrary to Section 1 (1) (a) of the Advance Fee Fraud and Other Fraud Related Offence Act, 2006 and punishable under Section 1 (3) of the same Act,” one of the counts reads.

Uwujaren said the defendants pleaded not guilty to the charge.

Following their plea, S.M.H. Ibekute, the prosecuting counsel, prayed the court to remand the defendants in the Port Harcourt correctional centre, while Dabiebo Livingstone, the defence counsel, asked the court to grant his clients bail.

The judge, however, ordered that the defendants be remanded in EFCC custody, pending the determination of their bail applications.

Related Topics:EFCC arraigns three suspects over 'N88m forex scam' in Rivers
Up Next