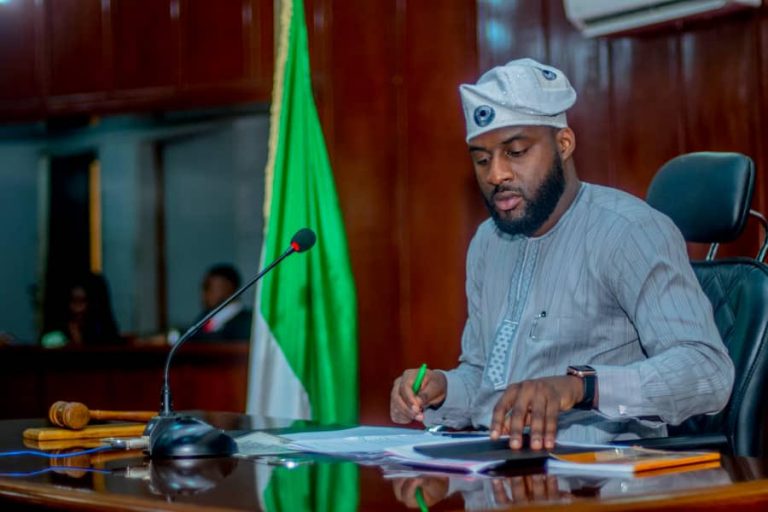 The Speaker of the Oyo State House of Assembly, Hon Adebo Ogundoyin, has reacted to the petition sent to the Economic and Financial Crimes Commission (EFCC) over the N1bn vehicle contract awarded by the House.

TrackNews Online reports that the EFCC had invited some management Staff of the Assembly over a petition sent to it by a former Prosecutor with the Special Presidential Panel on Recovery of Public Property, Tosin Ojaomo.

It was gathered that the anti-graft agency invited the lawmakers who were involved in the purchase of the vehicle around 8 am last Thursday and were released around 7 pm the same day.

Reacting in a statement sent to Naija News on Monday, the Oyo Assembly speaker stated that the EFCC was only doing its job.

Hon Ogundoyin said it was not out of place for the officials of the EFCC to question the leadership of the House in this regard.

stated that the Assembly is fully cooperating with the Anti-graft Agency, stressing that lawmakers will never hinder, disturb nor undermine the work of the commission.

“I am ready to visit the EFCC if invited. As the Speaker, I will surely answer any question relating to the Contract. We followed due process in the purchase of the Vehicles in line with the laid down procedures.

“We have since taken the petition in good faith. The petition is a strength to democracy. It is not strange to us as democrats who take transparency and accountability as our watchwords. We were transparent and we will continue to be,” Ogundoyin said.

The Speaker stated that quotations were received from three companies for the supply of the vehicles and the most satisfying amongst them was awarded the contract.

“Let me say that among the Houses of Assembly in Nigeria, Oyo State House of Assembly spent the lowest amount on purchasing cars for its members despite our large number. The vehicles supplied were of good quality and they are being enjoyed by our Lawmakers.

“This whole thing is giving me more drive and will. We will not relent until our people enjoy good government. At the House, we will make more laws that will have more direct impact on the people of the State,” he added.

According to the petition by Tosin Ojaomo dated December 7, 2020, the contract, which was executed by a firm (name withheld), was for the procurement of 33 Toyota Camry cars for the House members and the Clerk at N759 million as well as two Toyota Hilux pick-up vans for the Speaker, Adebo Ogundoyin, at N40m.

According to the petition, two Toyota Prado Land Cruiser SUVs valued at N106 million were also purchased for the Deputy Speaker, Abiodun Fadeyi and as Ogundoyin’s back-up vehicles, the petition stated.

Ojaomo, in his petition, alleged that the contract was for the supply of new 2019 vehicle models but noted that refurbished models with cleaned-up mileage were supplied instead.

The lawyer claimed that the contract was fraudulently arranged to favour the contractor instead of Elizade Motors and Mandilas Motors which also tendered quotations.

He added that the alleged scam was discovered when some of the 33 cars supplied by the contractor started having mechanical and electrical problems a few days after delivery to the lawmakers.

Ojaomo, therefore, in the petition asked the EFCC to recover the full contract sum from the firm.

Related Topics:EFCC Only Doing Its JobWe Have Nothing To Hide – Oyo Speaker
Up Next

Minister Slumps During Public Function, Rushed To The Hospital