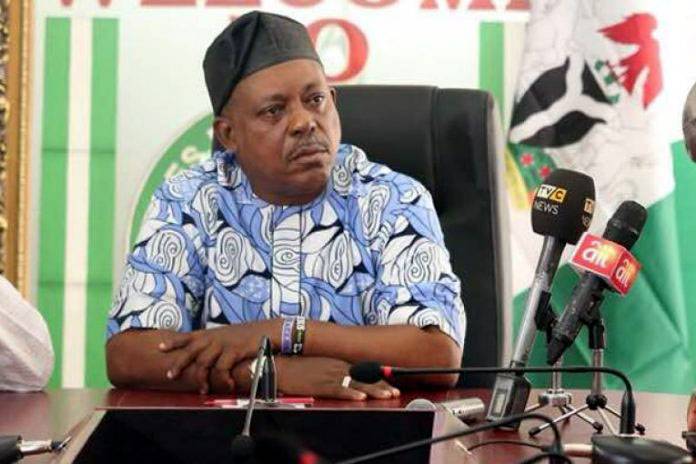 Following a report published in the July 5 2021 edition of The Point, national leaders of the Peoples Democratic Party have begun what stakeholders have described as a last minute effort to put the main opposition party in a position to wrestle power from the ruling All Progressives Congress come 2023.

Information gathered by our correspondents from impeccable sources within the PDP point at a possible removal of Uche Secondus as the National Chairman of the party even before the party’s forthcoming convention.
A source, who was a South West senatorial candidate of the party in the 2019 election, said top stakeholders were currently fine-tuning the process of changing the PDP national leadership by ensuring that those who should be in on the plan were convinced.

“As I speak to you, it seems no one would be able to help Secondus, as his main man is, right now, neither here nor there. To him, Governor Nyesom Wike is the only one who wants him out. But he is getting it wrong and all hands are now on deck to ensure a new lease of life for the PDP,” the source, who preferred not to be named, said.
Findings by our correspondents also revealed that the party’s leaders had been holding meetings into the night to ensure that the Secondus-led National Working Committee resigned from office before the convention. To this end, it was gathered that an emergency extended Exco meeting had been convened for next week to discuss this matter, among other crucial issues.

“The process for removing the national chairman may begin from there as all the governors and major stakeholders will be present,” a reliable source told TrackNews Online “If anyone of them (the NWC members) still wants his position, he will go to the field and contest with others who are also interested in the position,” another source said.

Though analysts and political watchers are of the opinion that former Vice President Atiku Abubakar is a major pillar of support for Secondus, owing to his (Secondus’) perceived loyalty to Atiku, many of the stakeholders who spoke on the impending tsunami said the former VP might not be able to do much to help Secondus at this time. According to them, Atiku’s position is always for the party to run smoothly because at the end of the day, the party will only be able to win an election on the foundation of a strong structure.

“Atiku cannot do much to help Secondus at this period. It is beyond him, and in fact, his own stand would be for the party to get it right this time. Secondus and his men must have the interest of the party at heart, not their individual interests alone. For the party to play the role Nigerians are yearning for it to play, the NWC must be sacked,” a source, who is part of the reconciliation efforts of the party, told one of our correspondents.
He said, “On a lighter note, I had told some people in the beginning that this man Secondus would not be able to take the party to victory in 2019. Seriously speaking, in my own part of Nigeria, we believe that the name given to a child influences what happens, most times, in the child’s life.
“You are bringing a Secondus to lead a national party. Don’t you already know that no matter how hard that party tries, it will always come second?”

I’M NOT AWARE – SECONDUS
While findings revealed that the PDP National Chairman was frantically knocking on all doors and riding on previous favours to ensure he retained his position, he told TrackNews Online Abuja correspondent on Sunday that he was not aware of any move to remove him. In a terse reply to our correspondent’s enquiry, the Media Manager of Secondus, Ike Abonyi, said, “The Chairman is not aware of anything of such.”

Meanwhile, a stakeholder of the party, who should know, is of the opinion that it is the modalities around getting these things done that become the challenge because the party’s constitution specifies the way a chairman can be removed.
He said, “The chairman of the party is the one empowered to convene the National Executive Committee meeting and it is only when the NEC is convened that far-reaching decisions of this nature can be taken. The other way this can be done is via the convention. Again, the Constitution states that the Chairman is the one that must declare the Convention open.
“The watchers of the party are also concerned about running into a similar scenario that produced the long-drawn 2017 Ali Modu Sheriff-Makarfi imbroglio, which had to go all the way to the Supreme Court. The party can least afford that.”
“There is also the challenge of whether Secondus alone or the entire NWC should be sacked. The challenge then is: how do you get the entire NWC to participate in their own dissolution. Either way, Secondus is going, going and struggling to stay,” the source added.

SARAKI’S POSITION
The state governors are a very strong caucus in any political party, and sometimes, the body language of the governors would determine, to a great extent, what anyone who is not part of the current governor’s forum would do.
Findings revealed that Saraki’s position was for the party to figure out how to achieve new energy without destabilising the party further.

BOARD OF TRUSTEES
The BOT is concerned about the mass defection of Governors of the party and the seeming lacklustre management of the Secondus-led NWC. But as the conscience of the party, they are hoping to be able to have everybody under one roof during the extended caucus meeting, which stakeholders say will be a make or mar gathering for the NWC.

The general feeling is that the Secondus-led NWC has stayed for too long for any good they are capable of doing and would have to go. Many of the stakeholders, who spoke in confidence to our correspondents, were of the opinion that the days of the National Chairman were numbered. However, those who spoke on record were rather tactical.
However, findings revealed that the Rivers State caucus of the party, elders and stakeholders, had taken a firm position that “Secondus must go”.

PDP HAS PROCESSES, PROCEDURES
The National Publicity Secretary of the PDP, Kola Ologbondiyan, as expected, said he was not aware of any move to remove the National Chairman. Being a member of the alleged troubled NWC himself, analysts said they did not expect him to admit to a conspiracy theory against Secondus.

“I am not aware. No, I am not aware. And there is no disagreement whatsoever in the National Working Committee of the party, none at all. If party leaders are discontented with the National Chairman, to the best of my knowledge, they have not expressed such. And I am not aware of anything like that,” Ologbondiyan told our correspondent.
“There could be disagreement or people could disagree on the basis of contesting for power but it is not to my knowledge that there is a move to remove anybody. The party has processes and procedures that govern its activities,” he added.
To the PDP Chairman in Delta State, Kingsley Esiso, the office of the National Chairman “is a tenured office.”
“When his tenure ends, if he likes, he can re-contest or go away, nobody is moving against him and nobody is removing him, my brother. The man is our party chairman, he is sitting as our chairman serving his tenure, and the question of moving him out does not arise,” he said.

“If his tenure ends, he has a choice to contest for a second term or not to contest. If he is contesting and you feel you don’t want him, then you can move against him. He is doing his first term. So his tenure will end and if he chooses to come back, he has the right. But if you feel like sponsoring anybody against him or contesting against him, then you are free to do so. If you like his face or you don’t like his face; if you like his style or you don’t like his style, these are not important. For you to remove him, you must follow the rule,” the Delta chairman maintained.
On his part, the National Vice-Chairman of the PDP in the South-West, Taofeek Arapaja, said he could not express his opinion on the purported move to oust the national chairman of the party since he was not privy to it.
“It would be difficult for me to comment on this because I don’t know about it. All I know is that we have congresses; other things I don’t know,” Arapaja said.

The Public Relations Officer of PDP in Oyo State, Akeem Olatunji, said that the fact that other members of the party were indicating interest in contesting the national chairmanship position of the party should not be read as a conspiracy against Secondus.
Olatunji said, “The PDP is a party with strong internal democracy and we always allow the popular will of the people to prevail. The congresses of the party would take place soon and everybody should have a plain ground to contest for positions in which they are interested.
“At the end of the day, Secondus might be returned if he is the most popular candidate. Nigerians should not fret. The PDP as a major political party is not under any threat.”

Also reacting, a former Minister of Transportation and a chieftain of the PDP, Ebenezer Babatope, said, “Whatever is good for the party must be done by the party. I have not heard about it, but as a party, we must ensure that the Nigerian people are in power. I want those who are taking such step to be very careful of what they are doing. They must make sure that they do things with the support of members of the party.

“I want to advise those who are involved that they should not rush into anything like this. Nigerian people are fed up with the government of the All Progressives Congress and the PDP must make sure that they rise up to the yearnings of the long suffering masses. The people must be given the right to elect the people who they like to govern them.”

Related Topics:EXCLUSIVE: PDP leaders in fresh plot to remove Secondus before Convention
Up Next