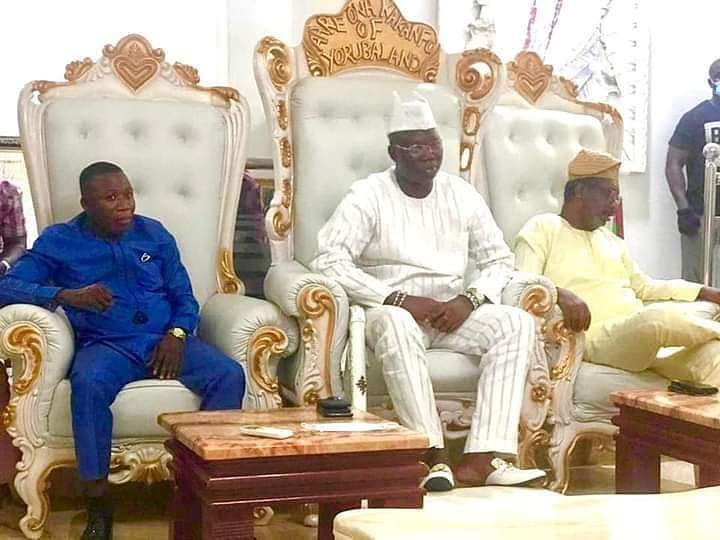 The Aare Oona Kakanfo of Yorubaland, Aare Gani Adams has appealed to prominent Nigerians to intervene and help save Yoruba Nation agitator and activist Chief Sunday Adeyemo aka Sunday Igboho.

Adams who made the appeal on Wednesday said Igboho must not be allowed to be destroyed by the travails he has found himself in after the Department of State Services (DSS) invaded his Ibadan residence.

The activist himself has been declared wanted by the secret police and has gone underground since then with his whereabout reports.

Commenting on the situation, Adams during an interview with The Punch on Wednesday appealed to prominent Yoruba monarchs, governors, and leaders to save Igboho from the current predicament.

He noted that what is on the ground currently is beyond the personality of Igboho but should be seen as about the security of the Yoruba people and the entire region.

He said the people must be preserved from Fulani invasion despite what they may feel about Igboho’s views and public utterances in the past.

“From my experience, it is difficult to fight the government and win,” the Aare declared.

He added that, “I appeal to our traditional rulers starting from Ooni, to Alake and other leaders, including our Governors who Sunday had abused and insulted – you know he insulted me too but we need to forgive and help him. We must not allow this to consume him.

“We are appealing to the generally not to allow Sunday Igboho to be consumed. The issue on the ground now is about the interest of the Yoruba Nation. Either you support self-determination or not, anything that happens to Sunday Igboho will be a slap to the entire Yoruba race. They should not forget that the issue on the ground is not only the issue of self-determination. It is also about insecurity – that some tribes are determined to overrun our own region.

“If you allow this to consume Sunday Igboho, it will create an advantage for the criminals, who have already invaded our farms and communities to cause a security threat.

Meanwhile, Governor Babagana Zulum of Borno State has stated that zoning the 2023 presidential ticket to the southern part of Nigeria is not a must.

TrackNews Online reports that the Borno governor was reacting to a resolution by the 17 southern governors after their meeting in Lagos.

Joining the clamour for the rotational presidency, southern governors had stated that the zone should be allowed to produce President Muhammadu Buhari’s successor for unity and fairness.

Speaking in an interview with Channels Television on Wednesday, Zulum reiterated his support that the southern part of Nigeria should produce the president in 2023 but cautioned against the use of “must” when such matters are raised.

Related Topics:AlakeGani Adams Begs OoniGovernors To Save Igboho
Up Next