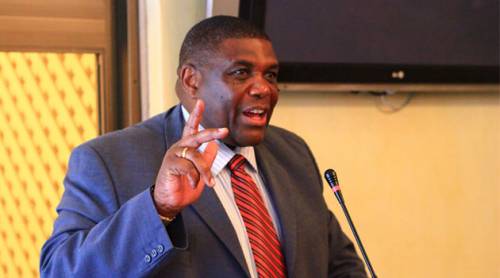 A Kenyan-Ugandan journalist, David Matsanga, has distanced himself from the arrest of the leader of Indigenous People of Biafra (IPOB), Nnamdi Kanu.

Matsanga in a live video on his online TV, Africa World Media, debunked claims online that he aided the repatriation of the IPOB leader to Nigeria.

He debunked this claim stating he had no ties with the Nigerian government or any other country’s government.
He said, “This morning, my attention has been drawn on the propaganda that is circulating on social media originating from Nigeria and from cohorts of the government of Nigeria talking about abduction, interception, kidnap by Nigerian security agencies together with international agencies of Nnamdi Kanu who was interviewed by our television station almost two months ago on 21st of May, 2021.

“And as a result of the propaganda churned by the (President Muhammadu) Buhari regime that Mr Nnamdi Kanu was abducted or taken from Kenya, I don’t speak for the government of the Republic of Kenya neither do I work for the government of Kenya. I run a media outlet online that works for Africa neither do I work for any government in Africa regarding activities that can …to be a conspiracy theory.

“We took interest in the Biafran issue and the Southeastern Nigerian issue because of the millions of videos that were sent to us as an online broadcasting institution.

“Nnamdi Kanu is able to say and I want to repeat, is able to say where who, how he was able to be arrested by Nigerian and other international Agents. If Nnamdi Kanu, who is still alive in a prison in Abuja, the Federal Republic of Nigeria, will point a finger at our station or anybody working with my station or myself, I ask God to take me that day. When Mr Nnamdi Kanu says he ever talked to Dr Matsanga ever since 21st when we last had our interview.

“I want to make it categorically clear that abduction, seduction, kidnap of Kanu will not deter my television station from talking about the ill-treatment, human rights abuses, the poor treatment of the people of Biafra. I am not a Nigerian, I am not a Biafran, I am not paid by any Nigerian to speak my mind. I am a trained, highly trained journalist, investigative journalist worldwide.

“I have worked with a reputable organisation like Sky news, therefore I don’t engage myself in activities of the Buhari type of regime. Thank you very much.”

Related Topics:I Had Nothing To Do With Kanu’s Arrest In Kenya – MatsangaKenyan-Ugandan Journalist
Up Next