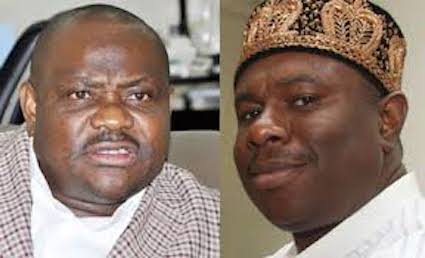 A chieftain of the All Progressives Congress (APC) in Rivers State, Dakuku Peterside, has reacted to Governor Nyesom Wike’s claim that he is a cultist, saying he had never been a member of any cult.

Wike had also alleged that Peterside was once stripped naked and disgraced as a student of Rivers State University due to his cult activities.

But speaking on a radio programme monitored by TrackNews Online in Portharcourt on Tuesday, the former NIMASA boss denied the accusations.

“I’m not a member of Ogboni and I don’t give Ogboni form as criteria to ascertain any government positions and contracts as accused,” he said while dismissing the allegation as cheap blackmail.

He urged Gov Wike to tell Rivers people who owns Cisco Construction Company that was awarded the construction of internal roads in Rumuepirikom at the cost of N3.5 billion.

“Governor Wike has to explain to Rivers People who owns [these companies]: Eazy E, ESJ Construction Company, and particularly Cisco Construction Company that owns an asphalt plant at Rukpokwu. CISCO was awarded all the internal roads in Rumuepirikom at N3.5 billion by NDDC. The company has been
paid hundred percent and didn’t do anything. Rivers State Government, to cover up fraud, has awarded the same internal roads.”

He expressed confidence that a better alternative to the current Rivers State Government will emerge in 2023.

Related Topics:‘I’m Not A Cultist But Ask Wike Who Owns CISCO Construction Company’– Dakuku Peterside
Up Next