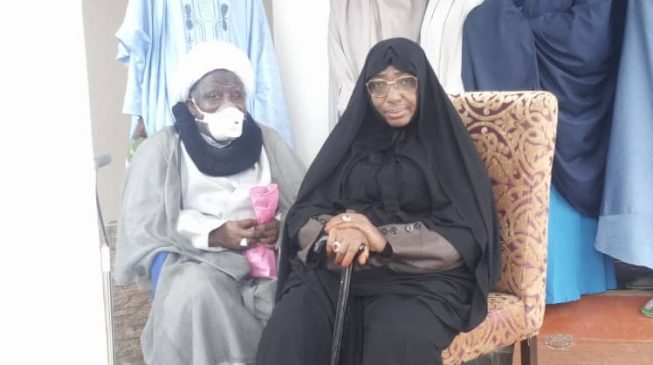 The Islamic Movement of Nigeria (IMN) has reacted to the release of its leader, Sheikh Ibrahim El-Zakzaky and his wife, Zeenat.

TrackNews Online reports that a Kaduna State High Court on Wednesday freed the embattled Shiites leader and his wife.

In a ruling that lasted over eight hours, the presiding judge, Justice Gideon Kurada upheld the no-case submission filed by El-Zakzaky and his wife.

Zakzaky and his wife have been standing trial in the court for the past four years on an eight-count charge of alleged culpable homicide, disruption of public peace and unlawful assembly among others levelled against them by the Kaduna State Government.

But in a statement by its President of Media Forum, Ibrahim Musa, the movement said the ruling has vindicated its leader, wife and members of the group.

The statement added that the ruling is certainly a victory for perseverance in the face of extreme persecution by the Nigerian government.

The statement reads: “This judgement has not only vindicated them and all members of the Islamic movement in Nigeria, but it is certainly a victory for perseverance in the face of extreme persecution by the Nigerian government. It is a victory for truth and justice against tyranny and impunity.

“We, therefore, give praises to the Almighty for yet another successful outing, which further proves to the world that the Islamic Movement and its leader, are only victims of impunity and mischievous plots by both the Buhari-led federal government and the El-Rufai-led Kaduna state government.

“Since both governments have again failed in court after a fair trial, we expect them to respect the judgement of this honourable court and the course of justice to release them with immediate effect.

“We wish to use this opportunity to also say a big thank you to all people of conscience, human rights activists and organizations, journalists and all those that joined in our dogged campaign for justice for the victims of Zaria genocide for the past five years. Thank you and God bless.”