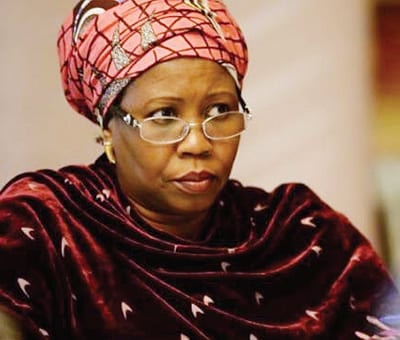 The Minister of State for Industry, Trade and Investment, Mrs Maryam Katagum, on Monday reportedly suddenly slumped while attending an event in Bauchi State.

TrackNews Online gathered the Minister was at an official assignment in the state – the launch of an empowerment programme held at Sanin Malam Plaza when she suddenly slumped.

She was thereafter rushed to the Trauma Centre of the Abubakar Tafawa Balewa University Teaching Hospital (ATBUTH) for medical attention.

An eyewitness quoted by Tribune online said the Minister upon arrival at the event had been touching her head occasionally and looked general uncomfortable and withdrawn.

Another eyewitness said that the minister, just as she stood up to deliver her speech at the event, suddenly held her head and went down flat.

As of the time of filing this report, she was at the ATBUTH trauma centre receiving medical attention.

Meanwhile, Nobel laureate and Playwright. Wole Soyinka has accused the Muhammadu Buhari government of kidnapping the leader of the Indigenous People of Biafra (IPOB), Nnamdi Kanu.

Naija News earlier reported that the arrested IPOB leader was on Sunday extradited to Nigeria to face trial after he jumped bail and fled the country in 2017.

Speaking in an interview with BBC Pidgin on Monday, Soyinka alleged that Nnamdi Kanu was kidnapped by the federal government.

He added that there would be an uproar in the country if the truth of how Kanu was arrested becomes known.

Related Topics:Minister Slumps During Public FunctionRushed To The Hospital
Up Next

EFCC Only Doing Its Job, We Have Nothing To Hide – Oyo Speaker