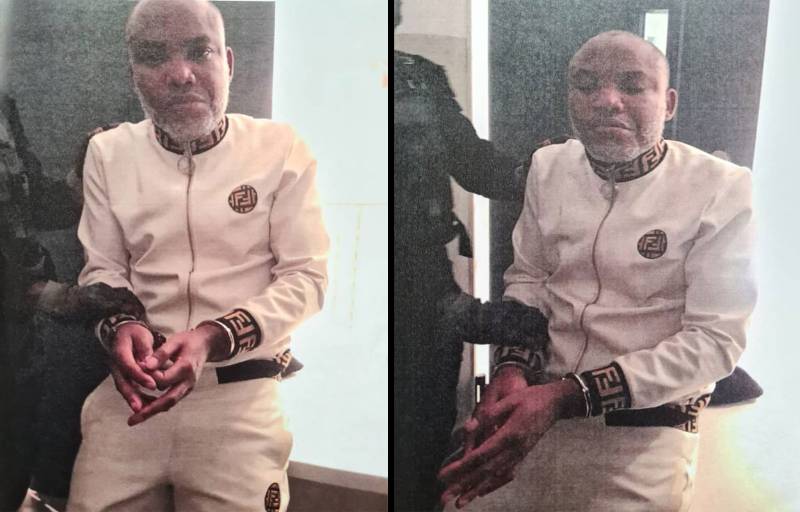 Detained leader of the proscribed Indigenous People of Biafra, IPOB, Nnamdi Kanu, has filed an application before the Federal High Court in Abuja, seeking to be transferred from the custody of the Department of State Service, DSS, to the Nigerian Correctional Service Centre in Kuje.

Kanu, in the application he filed through his team of lawyers led by Mr Ifeanyi Ejiofor, decried that he has been denied access to his medical doctors.

He said he might die in the custody of the DSS if nothing was done to urgently address his deteriorating health condition.

He specifically applied for an order of the trial court, “directing the transfer of the Applicant from the custody of the National Headquarters of the State Security Service to the Nigerian Correctional Service Centre in Kuje, Abuja, within the jurisdiction of this Honourable Court, where he was initially detained before he was granted bail, pending the determination of the charge”.

As well as, “An order of this Honourable Court directing the Defendant/Applicant’s custodian, to grant access to his medical experts/doctors to carry out a comprehensive independent medical examination of the defendant/applicant’s health condition/status, while in custody.”

It will be recalled that Kanu whose whereabout was hitherto unknown, was on June 27 returned back to the country after he was arrested from a yet to be confirmed African country.

The Attorney-General of the Federation and Minister of Justice, Mr Abubakar Malami, SAN, had insisted that he lawfully “intercepted” as a result of a collaborative effort of various security agencies in the country.

However, Kanu’s lawyer, Ejiofor, disclosed that his client was on June 18, illegally arrested at the airport and detained for eight days by Kenya’s Special Police Force before he was eventually handed over to their Nigerian counterpart.

Ejiofor alleged that the IPOB leader was tortured and subjected to various forms of inhuman treatment in Kenya, a situation he said worsened his health condition.

Trial Justice Binta Nyako had upon Kanu’s return to Nigeria, ordered his remand in DSS custody, even as his trial on a treasonable felony charge, which was initially fixed for October, was brought forward to June 26.

Meanwhile, in the fresh application, Kanu alleged that he has been “subjected to mental and psychological torture” by the DSS, saying it would be in the interest of justice for the court to order his transfer to the Nigerian Correctional Service Centre which he described as “an impartial facility that has no interest whatsoever” in the outcome of his trial.

An affidavit he attached in support of the application, read: “That this charge NO. FHC/ABJ/CR/383/2015 came upon 29th June 2021 and the Applicant was brought before the Court in Chains, handcuffs and leg-cuffs, blindfolded, and was consequently remanded in the custody of the State Security Service, even though there was no legal representation for the Defendant, and the matter was therefore adjourned to the 26th day of July 2021 for trial.

“That the Counsel to the Applicant was not served with any hearing notice before the appearance of the applicant in Court, neither were they aware that any action was scheduled to take place in the criminal charge NO. FCH/ABJ/CR/383/2015 on that 29th June 2021.

“That on the said 2nd July 2021 at about 5:00 pm, at the State Security Headquarters, in Abuja, the Applicant informed me of the following facts which I verily believed to be accurate and correct as follows; That he was kidnapped and/or abducted by Kenyan Security Forces on 19th June 2021, specifically at Nairobi Airport.

“That he was detained by the personnel of the Kenyan Police Force for eight days, and was throughout this period of detention subjected to all forms of inhuman treatment, brutal torture, causing grave and severe heart problem that almost took his life. That he was detained in an unconventional facility, not necessarily a police detention center in Kenya.

“That throughout this detention in Kenya, he was never allowed access to his relatives before he was handed over to their Nigerian Security counterparts who smuggled him into Nigeria in clear violation of his rights.

“That since he was smuggled into this country on 27th June 2021, he has been kept in solitary confinement without access to his family members, relatives, wife, cousins, and children, except his lawyer, who only visits after they must secure the approval and endorsement of the Director-General of the State Security Service, which approval are not usually granted as a matter of course.

“That he is still being subjected to mental and psychological torture by his custodians, on account of the conditions of his solitary confinement. That an ECG examination was carried out on Defendant, and it was discovered that Defendant’s heart had been enlarged by more than 13 per cent, posing a serious threat and danger to Defendant’s life.

“That there is a need for the Defendant to have access to his Medical Doctors to avert the danger looming against the life of the Defendant. That the health personnel attending to the Defendant in the custody of the State Security Service is not adequate considering the circumstances of the Defendant’s health condition.

“That if the health condition of the Defendant is not addressed most promptly, the Defendant may die in custody, even before his trial. It is essential that Defendant’s Medical Experts/Consultants be allowed to carry out proper, thorough, and independent medical examinations of Defendant to save Defendant’s life.

“That the Defendant undertakes to bear any cost incidental to getting the medical experts to attend to his ill health while in custody. The defendant can only be alive to stand his trial, which cannot be guaranteed because of his rapidly deteriorating health situation.

“The Defendant cannot effectively put up a defense to the charge against him, in his present deteriorating health condition. That I know that upon the arraignment of the Applicant, this Honourable Court in its wisdom initially remanded the Applicant in Kuje Correctional Service Centre, where he was held for almost two years before bail was consequently granted to the Applicant.

“That for the almost two years the Applicant was in custody in Kuje Correctional Facility, there was never any complaint about any form of misconduct against him. That the State Security Service is not a detention Centre, neither does it have the requisite custodial facilities to enhance the conditions of the occupants/inmates.

“That the Applicant has very limited access to his lawyers, who can only visit him after the approval of the Director of the State Security Services has been first sought and obtained, which said approval in most cases, takes days and that the above situation would greatly impede the Defendant’s preparation for his defense to the charge against him.

“That the favorable consideration of this application is compelling in the circumstance of the present Notice for the resumption of the Court’s Annual vacation, which would affect the hearing on the substantive charge already slated for the 26th Day of July 2021. That fair hearing can only be guaranteed when the Applicant is not remanded in the custody of his accusers.

“That it is a fact that Justice must not only be done but must be seen to be done. That it will greatly aid and serve the interest of Justice if this application is granted. That the respondent will not be prejudiced by the grant of this application. That I depose to this affidavit in good faith believing same to be true and correct and in accordance with the oath Act.”

It will be recalled that Kanu was on April 25, 2016, released on bail by the court on health ground, after he had spent about a year and seven months in detention.

Nevertheless, following the disappearance of Defendant after he was released on bail, the court, on November 14, 2018, ordered the three sureties to forfeit the N100million bail bond they each consented to.

Likewise, the court, on March 28, 2019, revoked Kanu’s bail and issued a bench warrant for his arrest.

Kanu’s lawyer had protested the revocation of his client’s bail, insisting that his disappearance was occasioned by the unwarranted invasion of his home at Afaraukwu in Abia State by the Nigerian Army, a development he said led to the death of many innocent persons that were in the compound at the time of the invasion.