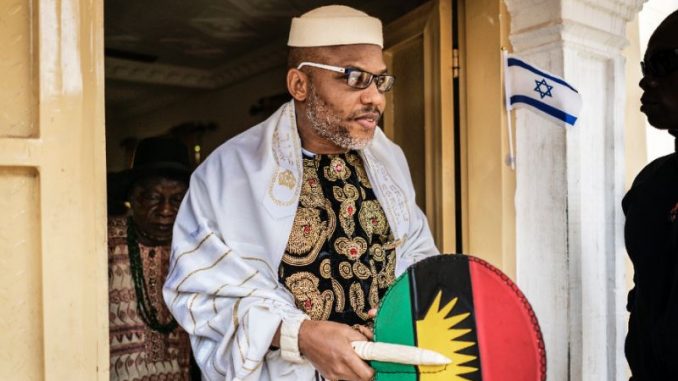 Nnamdi Kanu, the leader of the pro-Biafra group, IPOB, has spoken for the first time from detention since he was arrested in Kenya and brought back to Nigeria about three weeks ago to face treason trial.

He is detained in the facility of Nigeria’s secret police, the SSS, in Abuja.

Mr Kanu’s special counsel, Aloy Ejimakor, was allowed to meet with the IPOB leader on Wednesday, inside the detention facility, where he reportedly spoke with him for about three hours.

“The people that abducted him said that they were told by their sponsors that Kanu was a Nigerian terrorist linked to the Islamic terrorists in Kenya, presumably Al-Shabab.

“But after several days when they discovered his true identity, they tended to treat him less badly. Despite that, they told him they felt committed to hand him over to those that hired them,” Mr Ejimakor said.

Al-Shabab, a terrorist, jihadist group based in East Africa and Yemen, for decades has been carrying out deadly attacks in Kenya.

The Nigerian government must have contracted a third party, probably outside the knowledge and involvement of the Kenyan government, for the “interception” of Mr Kanu, going by the revelations from the IPOB leader.

Mr Kanu said he was held incommunicado and chained to a bare floor for eight days in a nondescript private facility in Kenya.

He said no warrant of arrest was shown to him or even mentioned to him, according to Mr Ejimakor.

“Kanu was in point of fact tortured and subjected to untold cruel and inhuman treatment in Kenya. He said his abductors disclosed to him that they abducted him at the behest of Nigerian government,” the lawyer said.

“He was blindfolded and driven to the tarmac very close to the plane without passing through the airport immigration. The plane departed Nairobi at about 12 p.m. and arrived Abuja in the evening.

“Kanu was flown to Abuja in the private jet on Sunday 27th June, 2021 from Jomo Kenyatta International Airport, Nairobi and that he was the lone passenger,” he added.

Mr Ejimakor said Mr Kanu was interviewed for the first time by three SSS officers, in his presence.

“The interview was revealing as it contained certain new allegations that were never heard of before. But all the questions relate directly or indirectly to his status as the leader of IPOB.

“I observed that despite what he has passed through, he was in high spirits and looked forward to overcoming the extraordinary rendition that brought him to Nigeria,” the lawyer said.

Related Topics:Nnamdi Kanu Speaks From DetentionReveals How He Was Arrested In Kenya
Up Next

SCOAN Reveals Who Is In Charge Of Synagogue Church