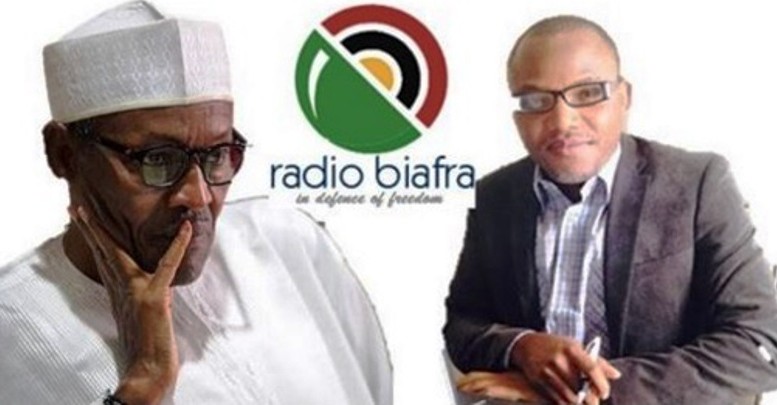 My instinct tells me that President Muhammadu Buhari might abandon the leader of IPOB Mazi Nnamdi Kanu in prison till the end of his second tenure in 2023.

According to Wiki, in December 2020, Kanu announced that IPOB had organized the Eastern Security Network (ESN) which was supposed to defend southeastern Nigerians from bandits and armed Fulani herders.

Kanu later gave all the governors of southeast Nigeria 14 days to ban open-grazing, threatening to deploy the ESN to enforce a ban if the authorities did not do so.

The Nigerian government regarded the formation of a non-state-sanctioned paramilitary organization as unacceptable and moved to suppress the group.

The situation escalated in January 2021 when the Nigerian military was repelled in an attempt to expel the ESN from Orlu, Imo. Before another offensive was launched, Kanu ordered the ESN to withdraw to the bush, temporarily ending the confrontation.

The Nigerian army and air force renewed hostilities on February 18 by launching a military offensive against the ESN; the next day, IPOB declared that as of 18 February, a state of war had existed between Nigeria and Biafra.

IPOB and other Biafran separatist groups consequently began to mobilize and fight the security forces across several southern Nigerian states. Despite this, Kanu maintained that IPOB was interested in a non-violent solution of the conflict and that ESN was supposed to fight bandits, not the Nigerian security forces.

Regardless, Nigerian authorities designated IPOB as a terrorist organization and claimed that Kanu was inciting violence.

On June 27 2021, Kanu was arrested in Ethiopia by Interpol and extradited to Nigeria where he is supposed to face trial. His arrest has sparked anger among Biafran separatists and other Nigerians supportive to his cause.

The World Igbo Congress (WIC) declared the arrest “illegal abduction and international gangsterism”. Following his arrest, questions had been raised over what was termed “Kanu’s disregard of the Nigerian constitution” to abscond bail in 2017.

On the occasion of his arraignment in court on 29 June 2021, Kanu told the presiding judge that the Nigerian military forced him to flee the country in 2017.

Hehehe from the look of things, Kanu go suffer pass Job sha. BUHARI might keep him till the next two years. Maybe the next government will pardon him.🤷

President BUHARI Might Keep Nnamdi Kanu In Prison Till 2023 – DO YOU AGREE?

Let’s hear from you all.

Related Topics:OPINION!! President BUHARI Might Keep Nnamdi Kanu In Prison Till 2023 – DO YOU AGREE?
Up Next