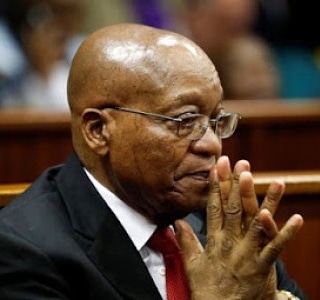 Former South African President, Jacob Zuma has been detained after he was jailed for 15 months for failing to appear before a commission investigating corruption accusations against him.

Zuma had ignored an order to appear subsequently after one appearance at the inquiry into corruption, what has become known as “state capture.”
While South Africa’s deputy chief justice and the head of the inquiry, Raymond Zondo, had sought to have him jailed for his defiance. The court had given him five days to present himself to the authorities. But Zuma, who had initially vowed to resist arrest, was said to have voluntarily surrendered before a midnight deadline from the police.

In a statement moments before his arrest, his foundation said Zuma was “on his way” to hand himself over to prison authorities.
“He is on his way to hand himself into a correctional services facility in KZN. A full statement will be issued in due course,” the foundation tweeted.
An eight-vehicle motorcade had pulled out of Zuma family’s Nkandla homestead about on Wednesday night.
The former president has continued to insist that all charges are the product of a political witch hunt.
He was ousted in 2018 following internal discord among the ruling African National Congress (ANC), against a backdrop of public outrage over alleged corruption and mismanagement of state resources.