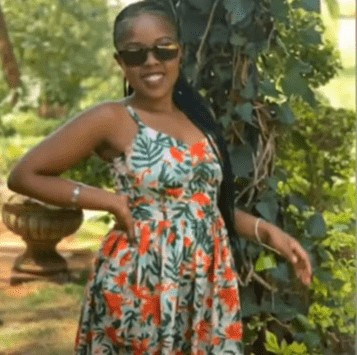 Report reaching our front desk has it that a police officer is on the run after allegedly killing his girlfriend by pushing her off the balcony of their fourth-floor apartment in Ngumba area of Kasarani, Nairobi County, Kenya.

The officer identified Kelvin Amwayi, is said to have had an argument with his girlfriend, Jackline Muthoni in the early hours of Saturday, July 3, before she fell off the balcony.

According to neighbours who responded, the officer threatened them with a gun before taking off soon after they rushed to see what had caused the loud bang.

The lady fell on the rear windscreen of a Nissan Tida.

According to a police report, Joshua Owiti, a security guard at an apartment called Kwea House called police at 4 am.

“There was a heated argument and commotion which led to the falling of the lady from the fourth floor balcony,” the police report read in part.

The woman was rushed to Kenyatta National Hospital where she was pronounced dead on arrival.

Before the police arrived at the scene, the suspect managed to flee the scene of the incident.

Police realized that the suspect was their colleague after they discovered a police note bearing the identity of Police Constable Amwayi Yakhama.

Related Topics:Police Officer Allegedly Pushes His Girlfriend To Death From Fourth Floor Balcony (Photo)
Up Next