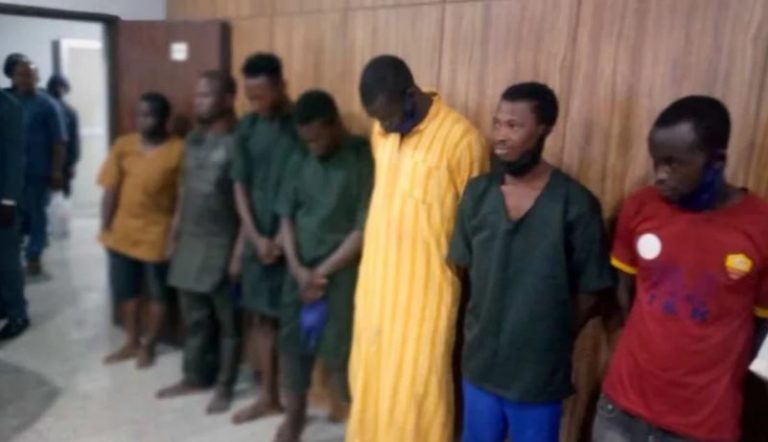 South West monarchs have called for the immediate release of the 13 aides of the Yoruba activist, Sunday Adeyemo, aka Sunday Igboho.

TrackNews Online reports that the aides were arrested by operatives of the Department of State Services (DSS) during a raid on his Ibadan residence on July 1, 2021.

But in a statement on Saturday, the monarchs, under the aegis of Forum of the Yoruba Obas, condemned the DSS invasion of Igboho’s Ibadan home in Soka and killing of his aides.

The statement signed by the President of the forum and Molokun of Atijere Kingdom, Ondo State, Oba Samuel Adeoye (Edema I); its General Secretary, Dr Abdulrasaq Abioye, Olukotun of Ikotun Ile, Kwara State; and 17 others.

The South West monarch also described the invasion of Igboho’s home as an infringement of his fundamental human rights and demanded the immediate release of hisaides and compensation for the families of those killed during the raid.

The statement reads: “As traditional rulers, we cannot bury our heads in the sand like an ostrich on a very sensitive issue like this which, if not well-managed, could further polarise the oneness and unity of Nigeria, considering the recent calls by prominent people in and outside the shores of Nigeria for the disintegration of Nigeria as one indissoluble and indivisible entity. We strongly condemn in its entirety the invasion and the gruesome murder of the people at Sunday Igboho’s house on July 1, 2021.

“We believe the killing by the officers of the DSS is unwarranted and unjustifiable, a violent breach of the fundamental right of those who were killed by the overzealous officers in Sunday Adeyemo’s house. We hereby call for the immediate release of those arrested at his residence. We demand that there must be an adequate compensation for the family of those people who were murdered during the operation.

“We equally, in the same vein, call on President Muhammadu Buhari to cause a discrete and holistic investigation into this volatile issue. While we as custodians of tradition and advocates of peace will not shield or encourage anyone to break the law of the land, we make bold to state that the Constitution of the Federal Republic of Nigeria is very clear and unambiguous that the governor of the state is the chief security officer of the state and as such, His Excellency, Governor Seyi Makinde, ought to be apprised of any move to cause the arrest of anyone in Oyo State who has or is likely to cause serious security breach before such a person or group of persons can be arrested.”

Speaking on the state of the nation, the monarchs lamented the rising insecurity in the country and asked President Muhammadu Buhari to find a lasting solution to the menace.

The monarchs, however, commended the South-West governors for establishing a security outfit, Amotekun, which has undoubtedly assisted a great deal in curbing insecurity in the South-West.