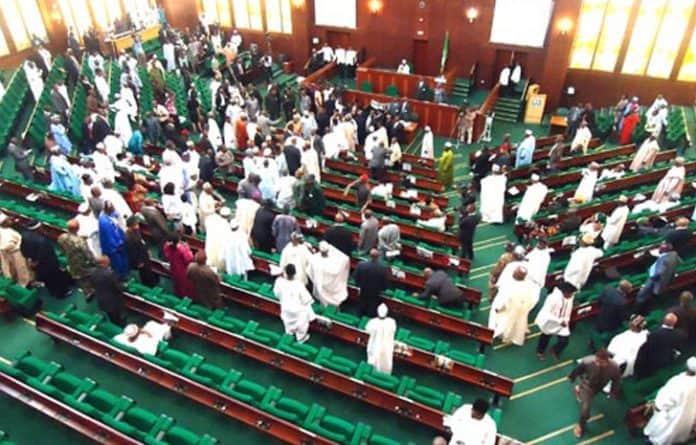 Nigeria’s House of Representatives has read for the first time a bill proposing a five-year jail term for unlawful protesters in the country.

The Bill sponsored by Hon. Emeka Chinedu Martins (PDP-Imo) is entitled: ‘An Act To Amend The Criminal Code ACT, CAP 38, Laws Of The Federation Of Nigeria, 2004 To Further Preserve The Sanctity Of Human Life And Property, And To Provide Specifically For Mob Action, Prescribe Punishment And Other Matters’.

The Bill, which was presented before the House on Thursday, has been approved by the House for a second reading.

“Definitions: Unlawful assembly, Riot, Mob action (a) When three or more persons, with intent to carry out some common purpose, assemble in such a manner or, being assembled, conduct themselves in such a manner as to cause persons in the neighbourhood to fear on reasonable grounds that the persons so assembled will tumultuously disturb the peace, or will by such assembly needlessly and without any reasonable occasion provoke other persons tumultuously to disturb the peace, they are an unlawful assembly. It is immaterial that the original assembling was lawful if, being assembled; they conduct themselves with a common purpose in such a manner as aforesaid”.

It also states that, “An assembly of three or more persons who assemble for the purpose of protecting any house against persons threatening to break and enter the house in order to commit a felony or misdemeanour therein is not an unlawful assembly.

“(c) When an unlawful assembly has begun to act in so tumultuous a manner as to disturb the peace, the assembly is called a riot, and the persons assembled are said to be riotously assembled.

“(d) When an unlawful assembly becomes violent as to commit unlawful acts against any person or property, the assembly is called a mob and their violent act is referred to as mob action”.

It adds that “(a) Any person who takes part in a riot is guilty of a felony and is liable to imprisonment for three years.

“(b) Any person who takes part in a mob action is guilty of a felony and is liable to imprisonment for five years.

(4) Substitute for Section 76 of the Principal Act, a new section 76:
(a) Section 76. Mob action against any person or property.

“Any persons who assembled together as a mob to commit violent act against any person or property are guilty of a felony and each of them is liable to imprisonment for life”.

The Bill explains that it “seeks to amend the Criminal Code Act, Cap 38, Laws of the Federation of Nigeria, 2004 to further preserve the sanctity of human life and property, and to provide specifically for the crime of mob action, prescribe punishment and other matters connected therewith”.

The sponsor of the piece of legislation against unlawful protesters, in his lead debate, said: “Mr Speaker, my highly respected colleagues, permit me to lead the debate on this very important Bill titled the Criminal Code Act Amendment Bill, 2021.

“This Bill was read for the first time in this Hallowed Chamber. Mr. Speaker, my honourable colleagues, this Bill seeks to amend the Criminal Code Act Cap 38, Laws of the Federation of Nigeria, 2004, to provide specifically for the crime of mob action, prescribe punishment and for other related matters.

“Mr Speaker, every now and then we hear and read in the news of mobs moving against people and properties.

“The word “mob” connotes a disorderly crowd of people, intent on causing trouble or violence. It is usually triggered spontaneously by accusations of a bystander, then joined by another and then another till it turns into a crowd of vengeful people causing carnage and destruction on its path.

“The danger with mob action is that participants typically believe they are punishing an accused for violation of the law, when in fact they are delivering jungle justice to an accused who may be totally innocent and has not been given an opportunity to be fairly heard. They serve as accusers, judges and executors.

“There have been records of crowds inflicting fatal injuries on their targets and destroying and looting properties based on unfounded accusations of theft of an item, allegations of missing genitals, witchcraft and blasphemy.

“As quickly as the mob causes carnage, the participants disperse in all directions, making it difficult for them to be apprehended.

“A notable case is that of the Aluu Four in 2012, involving four male students from the University of Port Harcourt who went to recover a debt, but were set up and accused of theft leading to their gruesome murder by a mob in Aluu, Rivers State.

“More recently in 2016, a man accused of homosexuality was beaten to death in Ondo State. Another man was also lynched in Ebonyi State, over accusations of theft of motorcycle. There have also been records of similar incidents this year.

“The failure of our law enforcement agents to prevent mob justice or punish those who participate in it has lent an air of acceptability to this vile practice. How often people resort to jungle justice as a form of punishment to alleged offenders is also a testament to the fact that people have lost faith in the criminal justice system. Ever too often the participants in mob actions go unpunished.

“This amendment to the Bill seeks to remedy that by providing for specific amendments to sections 69, 71 and 76 of the Criminal Code Act dealing with mob action and further prescribing punishment for the crime.

“The amendment to the Act will encourage our law enforcement agencies to go after persons involved in mob action and give impetus to the criminal justice system to bring such offenders to book.

“If more participants in mob action are apprehended and publicly prosecuted it will serve as a deterrent to others.

“I therefore humbly urge you to support the second reading of this Bill and its legislative proposal”.

Related Topics:Reps Work On Bill To Jail ‘Unlawful’ Protesters For Five Years
Up Next

Senate Reacts To Arrest Of Nigerians By Benin Republic Authorities