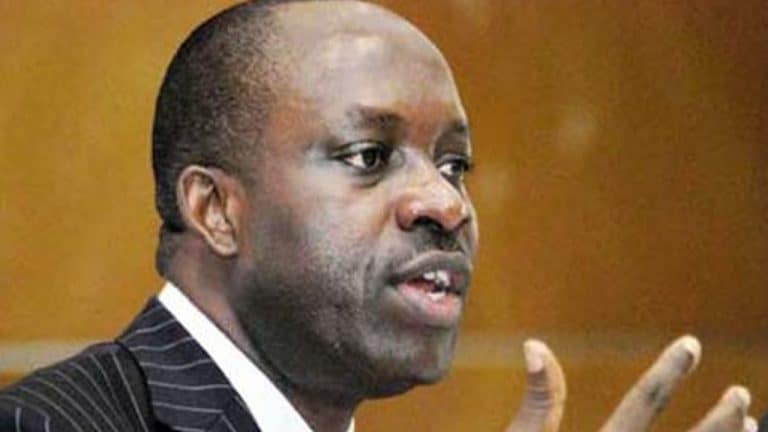 A former Governor of the Central Bank of Nigeria, Professor Chukwuma Soludo has declared that despite the absence of his name on the list of candidates for the Anambra governorship election which was published by the Independent National Electoral Commission, he would participate in the polls.

Soludo insisted that he remains the authentic candidate of the All Progressives Grand Alliance (APGA) for the November 6 polls and his exclusion by INEC is only temporary based on a court order.

TrackNews Online recalls the list released by the electoral umpire on Friday, 16th July did not contain the names of the candidates of the Peoples Democratic Party PDP, Mr Valentine Ozigbo, and that of the All Progressives Grand Alliance APGA, Prof. Chukwuma Soludo.

However, INEC in the list, declared a member of the House of Representatives, Chukwuma Michael Umeoji as the flagbearer of All Progressives Grand Alliance (APGA).

TrackNews Online understands the decision of INEC is in compliance with a court order in relation to the primaries of the political parties.

But reacting to the development, Soludo in a statement by his media aide, Joe Anatune, said he is confident as assured by his legal team that the current court order will be overturned and he would contest the November 6 election as the APGA candidate.

The statement read, “The Chukwuma Soludo Campaign has been briefed on a publication by the Independent National Electoral Commission where Honourable Chukwuma Umeorji has been published as the candidate of the APGA in the November 6, 2021, gubernatorial election in Anambra State.

“The INEC publication is based on a judgment by a High Court in Jigawa State, and the electoral body sensibly wrote that its inclusion of Umeorji as a candidate in the election is “By Judgment”.

“Our millions of supporters in Anambra State and elsewhere in the world are advised not to be dispirited by the publication seriously.

“Prof Chukwuma Charles Soludo will participate in the governorship election as the APGA candidate. His nomination was strictly in line with the Electoral Law and INEC guidelines. INEC observed the APGA Congress on Wednesday, June 23, 2021, where he was nominated after winning 93.4 per cent of the valid votes cast in a free, fair and transparent manner which was broadcasted live on national television networks as part of deepening the democratic process in Nigeria.

“Our team of dedicated and competent legal experts has studied the judgment and is confident of overturning it effortlessly. The party is at liberty to nominate the right candidate so long as due process is followed. Soludo’s nomination followed due process religiously.”

The statement added, “Our supporters and indeed all Anambra people, who have been waiting patiently for Soludo’s leadership of the state, are advised not to be deterred by the Jigawa State Court order.

“They should rather remain supremely confident of not only Soludo’s participation in the November 6 election but also his triumph in the polls with a big margin which will lead to a new era in our state for the benefit of all.”

Meanwhile, the Peoples Democratic Party, PDP has been accused of planning to rig the 2023 general elections through electronic voting.

TrackNews Online reports that Senator Ali Ndume said electronic voting was an idea hatched by the opposition party as part of its way of rigging the 2023 general elections.

The lawmakers’ statement is coming following polls at the red chamber of the national assembly for and against the adoption of electronic transmission of election results come 2023.

Related Topics:Soludo Reacts As INEC Disqualifies Him From Anambra Governorship Race
Up Next