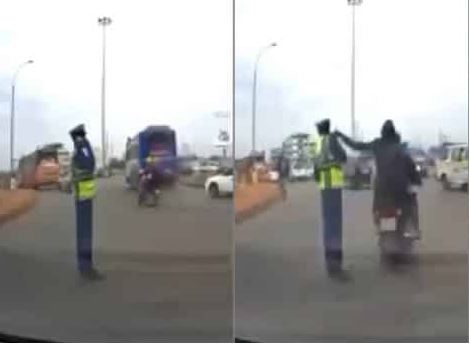 Many people have been left in shock after thieves were spotted in a video snatching a policeman’s phone while on duty.

In a video spotted online, the police officer was in the middle of the road making a phone call, when the thieves snatched his phone.

The thieves who were on a motorcycle rode towards him and snatched the phone before speeding off.

The police could not chase the thieves as they left the scene of the incident in a dash.

In another development, the Kano State Command of the Nigeria Police Force has arrested a man parading himself as an Assistant Commissioner of Police.

A statement by the State Command spokesman, DSP Abdullahi Haruna, on Thursday morning confirmed the name of the suspect as Mohammed Aliyu.

TrackNews Online understands that the suspect who is a resident of Mariri Hotoro Quarters was arrested at a hotel in the Kano metropolis.