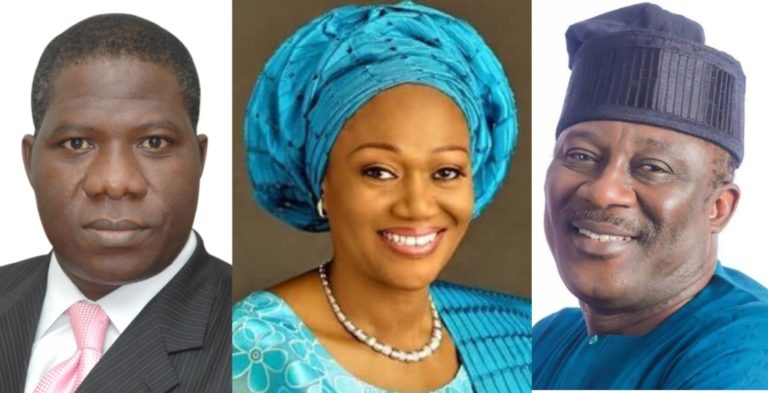 Their actions in hampering the credibility of future Nigerian elections could have a telling impact on the advancement of democracy.

Senators from the ruling All Progressives Congress, APC, with the exception of Senator Robert Ajayi Boroffice, all voted against the clause of the bill which sought to promote electoral credibility and reduce electoral malpractices.

Mrs Tinubu is the wife of former Lagos governor, Bola Tinubu, who is angling to become Nigeria’s president in 2023.

Messrs Bamidele and Adeyemi owe their ascendancy in politics to their antecedents activism and campaign for democracy in Nigeria.

Their actions in hampering the credibility of future Nigerian elections could have a telling impact on the advancement of democracy.

With 52 votes, the APC-dominated transferred the power to determine the suitability of electronic transmission of election results to the Nigerian Communication Commission.

The National Assembly would also have a say in that process.

While 28 senators voted for the electronic transmission, 28 senators were absent during the voting.

The bill was previously being considered clause by clause before being halted due to a disagreement among parliamentarians over section 52(3) of the bill.

The section had authorised the electoral commission to transmit election results by electronic means “where and when practicable.”

Senate Deputy Whip, Sabi Abdullahi, proposed amending the clause to subject the authority of the electoral commission to the approval of the NCC and the national assembly.

”The commission may consider electronic transmission provided the national network coverage is adjudged to be adequate and secure by the Nigerian communications commission and approved by the national assembly.

Mr Abdullahi’s suggestion did not sit well with some senators so his recommendation was put to vote and while the ”nays” were resounding and louder than the ‘ayes’, Senate President Ahmed Lawan treated the popular vote with disdain and ruled in favour of Mr Abdullahi’s amendment.

The Minority Leader of the Senate then insisted on putting the motion to vote, paving the way for APC senators to discard the clause which enables INEC.

Buhari’s aides should advise him, Nigerians are suffering: Emir of Kano