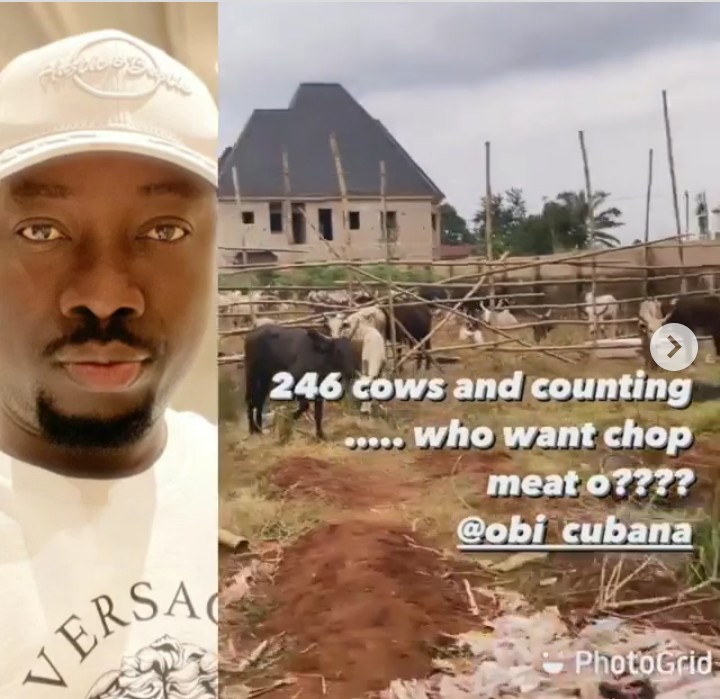 The backyard of Nigerian entrepreneur, Obi Cubana, has been turned into a cattle ranch ahead of his mother’s burial ceremony.

This became so as Cubana received no fewer than 246 cows from his friends for his mum’s funeral happening this weekend.

Obi had lost his mother in December 2020.

Sharing a photo of himself and his formal boss, Cubana is a tribute promised to repay the kindness Obi Cubana showed him when he lost his grandmother some couple of years ago.

He wrote; ‘I Will Never Forget The Role You Played Five Years Ago At My Mother’s Funeral, Na After This Very Day I Begin to Follow @obi_cubana Five Years Later It’s My Turn To Come Tet Oba To Lay My Grandmother To Rest. Oba GOneYour PoPopCorn Ready It’s About To Be A Big Netflix Movie Am Coming With The Cinema, History Will Never Forget. Adieu, MaMamaubana. We Love You So Much For Making Us A Living Legend @obi_cubana If You No Know This Man You Never Know Person.”

Subsequently, cows reportedly donated by friends of the entrepreneur were counted to be 246 with more said to be coming thereafter.

See the video of the cows below as shared on LIB.

Related Topics:Video: Friends Gift Obi Cubana 246 Cows For His Mum’s Burial
Up Next