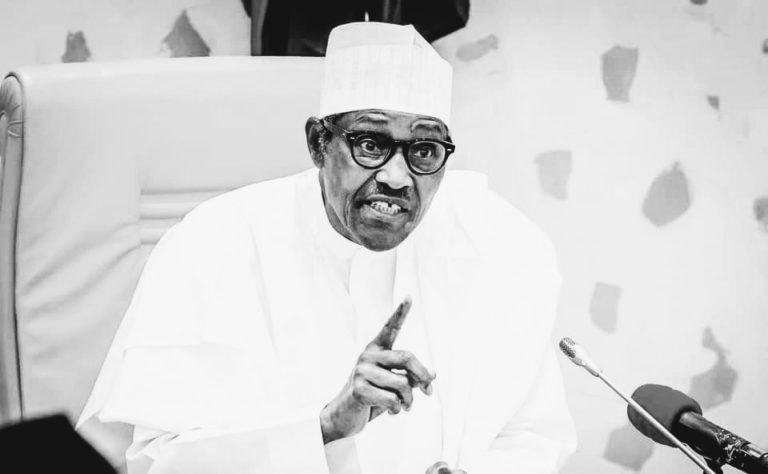 Buhari on Thursday called on the National Assembly to quickly pass the National Water Resources Bill to ensure that all Nigerians have access to adequate potable water.

President Muhammadu Buhari on Thursday called on the National Assembly to quickly pass the National Water Resources Bill to ensure that all Nigerians have access to adequate potable water.

Mr Buhari made the call during the inauguration of the Zobe Regional Water Supply Scheme in Katsina, urging other state governments to build strong partnerships with the federal government to provide infrastructure for Nigerians.

The president maintained that his administration would work tirelessly to ensure that Nigerians can access potable water supply and sanitation facilities.

For the president, this can only be achieved based on the “need to mobilise funds from all sources including the private sector.”

This, according to the president, is “where the need for quick passage of the National Water Resources Bill that made provision for the National WASH Fund, as well as regulatory environment for private sector involvement in the sector, become relevant.”

He added, “I, therefore, call on the National Assembly to give attention to the Bill towards its passage into law as soon as possible.”

Mr Buhari boasted that his administration was committed to developing the water sector since it took over power in 2015.

In his remarks, the Minister of Water Resources, Suleiman Adamu, noted that 106 water projects were left uncompleted by previous administrations.

The bill that seeks to transfer water resources from states to the federal government was first forwarded to the National Assembly in 2017.

While it was forwarded to be passed into law, many Nigerians kicked against it, forcing the eighth assembly’s hand to dump the bill.

However, it was reintroduced in 2020 by Abubakar Fulata, chairman of the House of Representatives Committee on Rules and Business.

Among those who criticised the bill were Nobel Laureate Wole Soyinka and Governor Samuel Ortom, who described the bill as “another version of RUGA.”

Mr Ortom stated, “The bill, in addition to its provisions, which are at variance with the Land Use Act is disguised land-grabbing legislation, designed to grant pastoralists unhindered access to river basins, adjacent marine and coastal environments across the country.

“The bill is another version of RUGA, which objective is to create grazing areas in the 36 states of the federation for herders and their livestock.”

On his part, Mr Soyinka said the ‘Bill on National Water Resources 2020’ was designed to hand Aso Rock Absolute control over the nation’s entire water resources, both over and underground.

“The basic facilitator of human existence, water – forget for now all about streams of righteousness! – is to become exclusive to one centralized authority,” he added.

Related Topics:Buhari moves to take over lucrative mineral resources of Southern NigeriaWater Bill: Again
Up Next