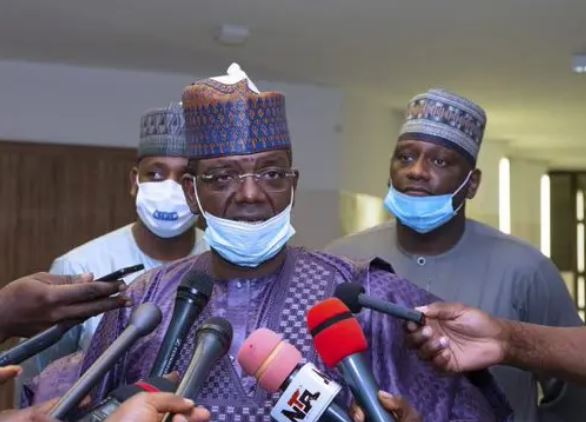 Zamfara State Governor Bello Matawalle has declared that his decision to defect to the All Progressives Congress (APC) is more than mere politics.

The Governor disclosed on Friday that he dumped the Peoples Democratic Party (PDP) in the best interest of the people of Zamfara.

TrackNews Online recalls Matawalle officially defected from PDP to APC on Tuesday at a ceremony to mark the occasion which took place in Gusau, the state capital.

Speaking on his defection, the Zamfara Governor while speaking on the Osasu Show programme on Friday noted that his defection will now bring greater development to the state and the issue of insecurity in the state will receive better attention.

“The issue of security is not just for APC or PDP. We have to put all hands on deck so that we can solve that problem,” he said,

“Politics is about interest and confidence. Many of the politicians have changed from one party to another, so it is not a new thing and I decided to change so that I can bring more peace to my state.

“We have achieved tremendous successes, particularly on the issue of banditry where we used kinetic and non-kinetic approaches. These approaches we used, in particular — dialogue — it worked but you know that even with the approach of dialogue, we have to bring a political solution to it.

“So, I want to make sure that during this my tenure, I’ll bring everybody in the state together under one basket; that we should forget our political differences, work together, try to bring more peace to the state.

“This is a ruling party where we have the senate, members of the house of representatives. We are stronger and I believe people will benefit more than before. Where my hand does not reach before, now I can get what I want.

“I believe with this coming together, I’m going to work hard with my other colleagues so that we can get more from the federal government, particularly on the issue of insecurity. Even before I decamped, I knew the arrangement Mr president had made to bring more equipment to our security agencies to fight the criminality in the northern region.

Meanwhile, President Muhammadu Buhari has disclosed that the decision of the federal government to focus on agriculture is paying off handsomely, and Nigerians are not regretting it.

He added that with the current economic realities, there is no foreign exchange to be wasted on the importation of food items.

Related Topics:Why I Dumped PDP For APC – Matawalle Speaks Out
Up Next