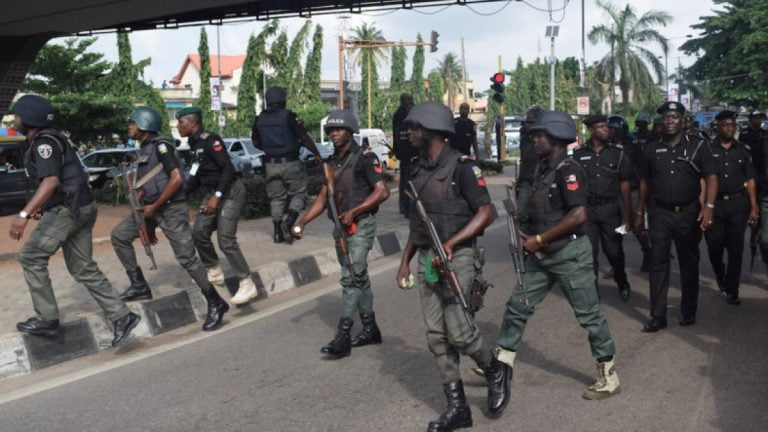 The Lagos State Command of the Nigeria Police Force has denied responsibility for the death of a 14-year-old female hawker said to have been killed by a stray bullet during the Yoruba Nation rally in Ojota on Saturday.

The Police in a reaction after the news of the girl’s death went viral said its operatives present at the scene of the planned rally didn’t fire any live bullet.

It was gathered that the bullets fired by the security operative had severed the stomach of the girl, said to be 14 years.

She was reportedly displaying drinks at a shop when the bullet hit her.

Her body has been covered with a piece of cloth as a crowd gathered at the spot.

But reacting to the development, the Lagos State Police in a statement titled “Re: Alleged Killing of 14 year-old Girl at Oodua Rally in Lagos” by its spokesperson, Olumuyiwa Adejobi said the corpse has been discovered not to be fresh after investigations.

The statement added that the girl might have died from wounds sustained from a sharp object injury.

Adejobi noted that those blaming the police for the death of the girl are only trying to create confusion in the mind of Lagosians and Nigerians as a whole.

The full statement reads: “The attention of the Lagos State Police Command has been drawn to a news making rounds that a 14 year-old girl was hit and killed by police bullet today 3rd July, 2021 at the venue of the Oodua Republic Mega Rally in Ojota, Lagos.”

“The Command hereby wishes to debunk the rumour and state categorically that it’s a calculated attempt to create confusion and fears in the minds of the good people of Lagos State and the country at large.”

“The Command did not fire a single live bullet at Ojota rally today. The said corpse was found wrapped and abandoned at a distance, far from Ojota venue of the rally, behind MRS Filling Station, inward Maryland, on the other side of the venue, with dried blood stains suggesting that the corpse is not fresh. After a close look at the corpse, a wound suspectedly sustained from a sharp object was seen on it.”

“The news is false and mischievous. The Command, therefore, urges the general public to disregard the news and go about their lawful normal daily activities while investigation to unravel the incident will commence immediately. The Commissioner of Police,Lagos State, CP Hakeem Odumosu, therefore commiserates with the family of the found deceased and assures that thorough investigation will be carried out.”

“The Command equally wishes to warn against the spread or peddling of fake and unconfirmed stories as such could be dangerous and counterproductive.”

Meanwhile, the co-convener of Concerned Nigerians advocacy group, Deji Adeyanju, has criticized Igbo leaders for failing to speak up against the arrest of Nnamdi Kanu.

He was then arraigned before Justice Binta Nyako who ordered his remand in the custody of the DSS till July 26th.

According to his lawyer, Ifeanyi Ejiofor, the IPOB leader was subjected to torture by the secret police and is currently suffering from a heart-related disease.

In a series of posts on his Twitter page on Saturday, Adeyanju described Igbo leaders as cowards for abandoning Kanu and not defending him.

Related Topics:Reveal How She DiedYoruba Nation Rally: Police Deny Shooting Hawker In Ojota
Up Next