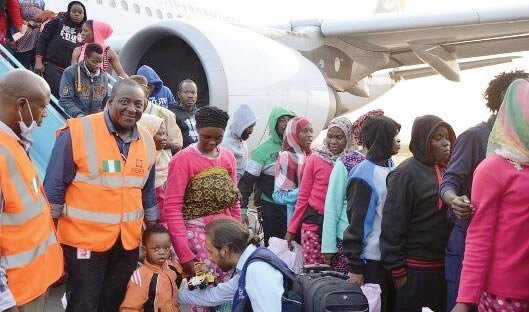 Among those to be repatriated are victims of human trafficking and those detained in Libyan prisons for migration offences.

The Nigerian Mission in Tripoli said on Friday that it was evacuating 100 Nigerians stranded in Libya, with another set of 100 to be returned home in the next 10 days.

Kabiru Musa, Chargé D’affaires en titre of the Nigerian Embassy in Libya, disclosed this in a statement.

According to Mr Musa, the evacuees should arrive in Nigeria via the Nnamdi Azikiwe International Airport at 10 p.m Nigerian time.

Mr Musa said among those to be repatriated are victims of human trafficking and those detained in Libyan prisons for migration offences, amongst others.

The aircraft arrived at Tripo0oli on Friday, 13th August 2021 at 2.00 pm local time for the evacuation exercise.

“The repatriated Nigerians included men, women and children some of whom are either victims of human trafficking or of ISIS reign of terror held captives for several years until their captors were killed. Others were jailed for committing migration offenses.

“The Embassy in fulfilling its obligations to Nigerian citizens exerted efforts with coordination of the Ministry of Foreign Affairs to ensure the return of the Nigerians home and to reunite them with their families.

“The exercise was successfully carried out with the support of the Ministry of Defense which provided the aircraft.

“The exercise will be a continuous one until all Nigerians stranded in Libya are returned home.

Already, another batch of 100 Nigerians are set to be evacuated in ten days,” Mr Musa said.

Mr Musa deeply appreciated the support and cooperation of the Libyan authorities for the smooth conduct of the exercise.

Related Topics:100 stranded Nigerians evacuated from Libyaanother 100 to follow in ten days
Up Next