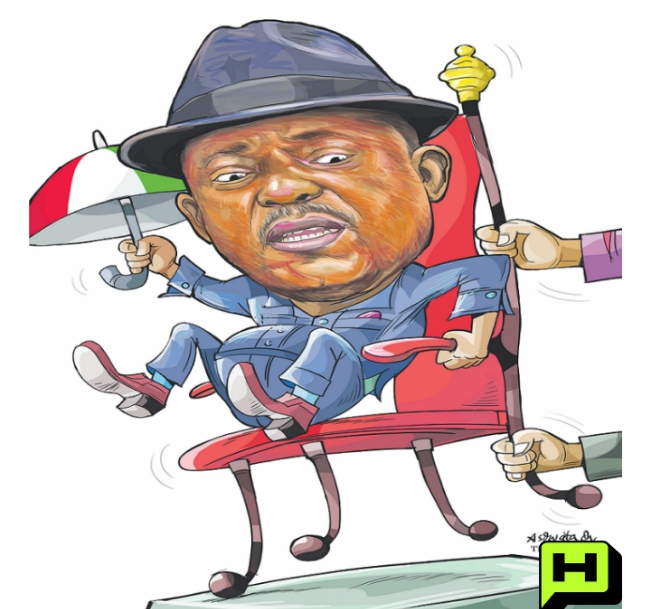 August 8 By now, the picture must be very clear to Prince Uche Secondus, embattled National Chairman of the main opposition party, the Peoples Democratic Party, PDP, that his planned second term bid in office may not manifest due to some influential forces in the party who are vehemently opposed to his continued stay as leader of the party.

The bone of contention between his detractors and supporters is whether to allow him serve out his tenure which ends this December. This squabble has fueled the crisis in the party forcing the Board of Trustees to set up an expanded reconciliation committee to broker a truce and restore peace and stability to the national executive. 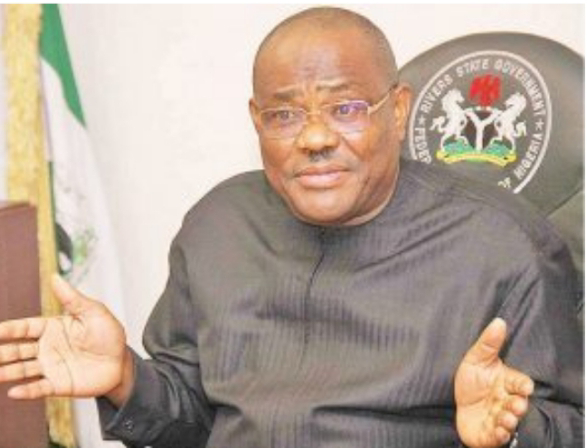 As exclusively reported in the online edition of this newspaper last Wednesday, THEWILL learnt that one of the reasons the Governor Nyesom Wike group backed by Oyo State Governor, Oluseyi Abiodun Makinde and Adamawa State Governor, Ahmadu Umaru Fintiri amongst some notable leaders facilitated the surprise resignation of seven members of the National Working Committee (NWC) of the party was to force Secondus to resign.

Nigeria on The Brink: Can Buhari, Elite End The Carnage?
His re-election bid, his opponents believe, will open old wounds that his erstwhile ‘godfather’ and sponsor, Wike, had harboured against him when he reportedly ‘helped’ former Vice President Atiku Abubakar emerge as the party’s flagbearer beating the promoted Governor Aminu Tambuwal/ Wike joint ticket during the presidential primaries in Port Harcourt in 2019

By Thursday, it appeared that a deal had been brokered to at least allow Secondus complete his tenure following the quick interventions of some governors led by Chairman of the PDP’s Governors Forum, Tambuwal and Board of Trustees, BoT members.

That move prompted the Deputy National Publicity Secretary of the party, Prince Diran Odeyemi, who was among the seven deputy national officers that resigned from the NWC last Tuesday, to withdraw his resignation.

The Cost of Funeral Services in Singapore Might Surprise You
Funeral | Search Ads
by TaboolaSponsored Links
Odeyemi pledged to work with the Secondus-led NWC to ensure a successful National Convention, where new officers of the party will be elected.

He said in a letter dated August 4, 2021, that his decision to withdraw his resignation was taken in view of the activation of the internal method of resolving issues by the party elders and leaders across the length and breadth of Nigeria.

“This decision is taken in view of the activation of the internal method of resolving issues by our leaders across the length and breadth of Nigeria,” he said, adding that, “I also wish to state expressly that whatever embarrassment the resignation has caused the party, its leaders, members and supporters are highly regretted. 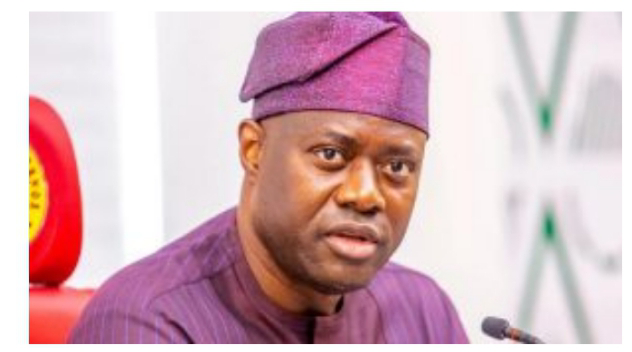 “Most importantly, in view of the fact that the tenure of myself and other members of the present National Working Committee (NWC) will expire in another three months, it is my view that the boat should not be rocked under any guise.

“Consequently, I pledge my loyalty and commitment to the party and the Prince Uche Secondus-led NWC, and will continue to play my roles to ensure a successful National Convention, which will usher in new national officers.”

According to a party source, the Wike group offered members of the NWC between N25m ($50K) – to N50m ($100k) per official to resign from the Secondus-led party executive. Only seven members, who are deputies, accepted the deal, according to our sources.

A BREATHER FOR NOW
While they promised to remain loyal to the PDP, their resignation according to a party source, was part of the clamour for leadership change, targeted at removing Secondus who has fallen out with his main sponsor and backer, Wike.

However, like the proverbial cat with nine lives, Secondus, popularly referred to as ‘Total’, who has weathered many storms since assuming office in December 2017, has again survived the coup to unseat him.

SOURCE OF TROUBLE
Though Mr. Kola Ologbodinyan, National Publicity Secretary of the PDP told News men that Secondus had never intimated him about a second term nor made any move that indicated another shot at the Chairmanship. Despite his claim, this newspaper gathered that the race for the 2023 Presidency is the reason behind the raging storm over the removal of the Secondus-led NWC. The Wike group according to our checks does not believe Secondus would support their bid for the party’s presidential ticket.

Ologbodinyan thinks otherwise. According to him, many persons still misconstrue the role of the National Working Committee, NWC, of the party hence, what he called the “current fretting in the party.”

“What many people do not understand is that there is a criterion about who is where and who does what. We have not reached that stage in the NWC. We are products of our respective zones as persons who occupy positions in the party. That is why people are fretting.”

He said there is no crisis but disagreement in the party. “There are concerns by members and this is normal in any organization be it church or corporation or office and we have the internal mechanism to resolve them and that mechanism has been activated.”

Our investigation, however, revealed that there are three strands to the ongoing ‘disagreements’ in PDP. The first one is already playing out. It is intended to make sure Secondus entertains no idea of re-contesting the Chairmanship when his tenure expires this December. According to sources, the fall out of the party’s presidential primaries that the former Vice President won still rankles.

Checks revealed that Wike had wanted Secondus to support the emergence of Tambuwal as presidential candidate with the Rivers state Governor as running mate.

Following their humiliating defeat at the primary, Wike, who had hitherto bankrolled the party, stopped funding it accusing Secondus of staying on the same, ‘forbidden’ track of disloyalty and disobedience. To compound matters, three governors, two senators and three federal legislators have so far defected from the party while allegations of corruption, which is a subject of litigation, has embroiled the party’s NWC.

The second phase of the plot, which is becoming clearer to party elders and leaders as they wade into the lingering crisis, is what a source described as ‘current dynamics at play in both the ruling APC and the opposition PDP.”

According to the party source, the heated crisis in the parties is a prelude to the likelihood of the birth of a new political party often termed ‘Third Force’ by analysts, which will be dominated by aggrieved ranking members of both the ruling All Progressives Congress, APC, and the PDP. This move according to the source could be a masterstroke as many Nigerians blame the two main political parties for the current deplorable state of the country.

Enter The Third Force
According to the source, both PDP and APC have aggrieved governors, while some current federal cabinet Ministers and lawmakers have been eyeing the possibility of leaving their parties and coming together under one umbrella ahead of 2023.

“If you have say five governors each leave both parties that makes ten. What would remain of the PDP would be eight governors, while the APC would have 18. What now plays as deciding factors would be: who becomes the presidential candidate because don’t forget that a president is duly elected when the candidate wins the popular vote including garnering the prescribed quota of votes spread across other states of the country.”

Though this is a typical political calculation similar to the emergence of n-PDP that broke off from the then ruling PDP in protest against the nomination of ex-President Goodluck Jonathan at the national convention for a second term, our source said it is a high possibility again.

Recall that Senator Rochas Okorocha of the APC had flown this kite in mid-January in Port Harcourt when he was a guest of Wike in the Rivers capital.

Okorocha said; “In this dispensation, there are many bad people in APC, many bad people in PDP. The good people of APC and good people of PDP must come together for the purpose of making Nigeria great. I could imagine where I would join forces with Wike. Governor Wike, this is my hand of friendship. Let us bring all like minds, all great people of Nigeria. Rather than complaining, let us come together to make this country greater and greater as it should be.

“What brought me here today is not a party but love and friendship. I am not PDP, I am APC but the time has come when we must break the jinx of party division and embrace brotherhood and friendship and be able to state what is good and what is bad. A bad man is a bad man whether he is in PDP or APC”, Okorocha had said.

While this option has proved attractive to aggrieved party members of both major parties, according to the source it is because of similar problems plaguing them. APC is yet to resolve the issue of where it would zone its presidential candidate while the PDP has a party understanding that if enforced it would give its ticket to a candidate from the north. However, with the current agitation for power shift to the south, which the Southern Governors Forum recently supported, the PDP is in a fix. The fear is that giving Secondus another chance as National Chairman would perpetuate the status quo for his ‘man’ Atiku Abubakar, again.

For the APC, party chieftains are also divided on what they call a gentleman’s understanding that power should shift to the south after President Muhammadu Buhari’s tenure. However, Buhari in a television interview in May said the party would decide his successor and a former National Chairman of the party, Chief John Odigie Oyegun replied that the reality is that zoning must be respected in the party.

Frontal in his reaction, a former Governor of Ogun State and an APC chieftain, Chief Olusegun Osoba stirred controversy in the party when he said there was an understanding on zoning the presidency to the South after Buhari, saying that the party constitution drafters did not include it in the document because they did not want it to become a subject of litigation in the future. These dynamics are the crossroads that faces both parties with hard choices ahead of the 2023 general elections.

FIGHT TO PUT OUT THE FIRE
Responding almost immediately to the brewing crisis, the PDP Board of Trustees, BoT, after hours of meeting behind closed doors at its national secretariat, Abuja, chose to intensify reconciliation efforts to keep the party together and stronger ahead of the PDP elective convention slated for December.

The meeting which was summoned by the chairman of the Board, Senator Walid Jibrin, had in attendance prominent party stalwarts including Secondus, National Secretary, Senator Tsauri and Deputy National Chairman North, Senator Suleiman Nazi; past Senate presidents, Abubakar Bukola Saraki, David Mark and Adolphus Wabara.

Earlier this year, the BoT and National Executive Committee, NEC had passed a vote of confidence on the Secondus-led NWC. However, events of the past few months have been quite challenging for the Rivers State born party leader, as some party chieftains escalated calls for his resignation or ouster.

The expanded reconciliation committee which has seven BOT members, all13 governors of the party, all NWC members, three former governors, three former Ministers, former presiding officers of NASS and current PDP NASS leaders will determine how the party advances from the debacle.