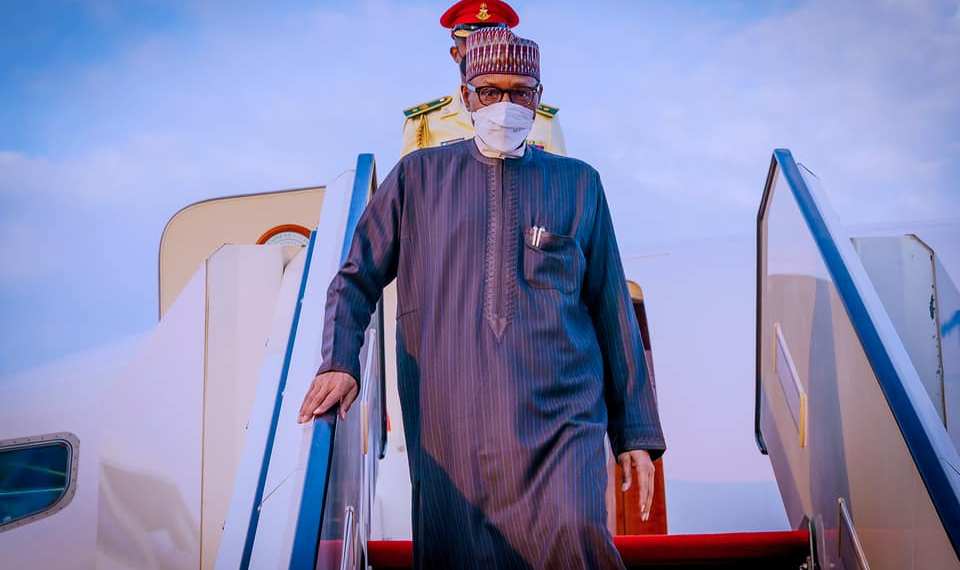 A day before returning to the country, Mr Buhari visited former Lagos state governor Bola Tinubu, who is also said to be in London on a medical trip.

Two weeks after attending the Global Education Summit in London and staying back to be attended to by his doctors, President Buhari returned to the country on Friday.

Nigeria’s Air Force 1, tracked via Flightaware, was expected to land in Nigeria at 05:52PM West African time. At the time of filing this report, the Presidential aircraft was last seen near Kaduna.

Mr Buhari left Nigeria on July 26 to the United Kingdom to join in the Global Education Summit on Financing Global Partnership for Education. A press release by Femi Adesina had added that Mr Buhari would be staying back for a scheduled medical check-up.

Before departing London for Nigeria, Mr Buhari used the opportunity to visit former Lagos state governor and National Leader of the president’s party, the All Progressives Congress (APC), Bola Tinubu, who is also said to be in London on a medical trip.

The education summit, co-hosted by British Prime Minister Boris Johnson, and President Uhuru Kenyatta of Kenya, sought to generate $5 billion to transform the education sector in low-income countries, including Nigeria.

At the summit, Mr Buhari was on a panel with other African countries, including President Kenyatta, President Nana Akufo-Addo of Ghana, President Faure Eyadema of Togo and President Lazarus Chakwera of Malawi.

Buhari pledged to increase the budget for the education sector in Nigeria by as much as 50 per cent over the next two years.

“We commit to progressively increase our annual domestic education expenditure by 50 per cent over the next two years and up to 100 per cent by 2025 beyond the 20 per cent global benchmark,” he said.

Mr Adesina said his principal and Mr Johnson during the bilateral talks, appraised the war against different forms of terrorism in Nigeria and agreed that “the judicial process runs without interference, no matter who was involved.”

That both men reviewed the security situation in Nigeria, with Mr Johnson who pledged Britain’s preparedness to lend a helping hand.

“We are available to help,” Mr Adesina quoted Mr Johnson as saying.

Related Topics:Buhari returns to Nigeria two weeks after attending London Summit
Up Next