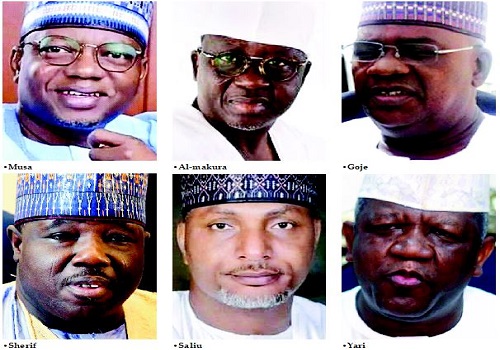 The ruling party All Progressives Congress (APC), has released the time-table and schedule of its September 4 local government congresses across the states. Also, the date for national convention is drawing closer.

The National Secretary, Senator John Akpanudoedehe, said the congresses are critical to the convention. With the guidelines and commencement of the council congresses, which will elect a three-man delegation to the National Convention, the party structure is gradually taking shape and the focus, once again, will shift to the chairmanship position.

The national chairmanship aspirants are seasoned politicians. The next chairman, apart from preparing the party for the 2023 general elections, will have to deal with an enormous issues inherited from the past leadership and ensure that the party lives up to its ‘progressives’ credentials. The chairman will be saddled with the responsibility of changing the current perception among Nigerians, rekindle the hope and confidence of chieftains in the party and provide a level playing ground for the presidential aspirants during the presidential convention, if consensus cannot be achieved.

The ultimate goal is to secure victory for the party in 2023. To achieve this, old wounds must be healed and an emergency response unit must be set up to cater for defeated contenders during and after the general elections.

Among the candidates jostling for the position of chairman are Senators Abdullahi Adamu, Tanko Al-Makura, George Akume, Mohammed Sani Musa and Danjuma Goje. Also in the race are Mallam Mustapha Saliu and former Governors, Ali Modu Sheriff and Abdulaziz Yari.

Al-Makura is a man of honour and integrity. He is loyal party man. At 69, he is an elderstatesman, a man of immense experience and reliable politician.

Akume is a long standing politician. He is loved by his people, who voted for him thrice to serve as governor. He is currently a minister and a respected party leader.

Adamu, a former minister and governor, is a senator. He is an old political war horse, held in honour by followers.

There are forces in the party opposed to the ambition of the former governors. they believe they are too strong and high handed.

Mustapha will bring with him three years of experience as a former deputy chairman of the Congress for Progressives Change (CPC) and a member of the defunct All Nigeria’s Peoples Party (ANPP). Unlike the other candidates, the Kwara-born politician in recent times has not shown much interest in making public his intentions and agenda to clinch the top party position.

Senator Sani Musa from Niger State has featured predominantly in the national dailies as a strong candidate for the position. The North Central region is being touted by pundits as the preferred region to produce the next chairman.

Musa represents is representing the Niger East District in the 9th Senate and he is chairman Senate services.

Musa has remained visible and consistent in envisioning a radical departure from the docility and obstinacy that was the hallmark of the past leadership of the party in resolving delicate issues that requires tact and skill of reconciliation.

Musa’s supporters said his rich experience in managing people will come handy. He’s a goal-oriented person; energetic, inventive and a workaholic. Generally, the aspirants will be assessed by the party, based on their integrity and discipline, capacity for rebuilding and fostering mutual trust, friendship and respect among party members and Nigerians as a whole.

Generally, the challenge of managing a big party of diverse people with a potential for protracted crisis requires a technocrat and a politician with the prerequisite leadership skills of the modern era – one that is vibrant, and focus driven.

The APC is going through a new metamorphosis on the account of the ongoing reconciliation and defections into the party ahead of the national convention. The expectations of these gladiators must be managed in such a way as to avoid a possible implosion of the party. In addition, the opposition party is regrouping and playing to the gallery by capitalizing on the past challenges of the APC to whip up public sympathy.

It is expected that more aspirants will declare their intention to contest for the chairman. However, only an aspirant who is able to weather the storm will lift the crown.

Related Topics:Can APC chairmanship aspirants weather the storm?
Up Next