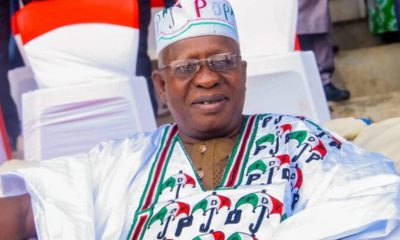 The acting National Chairman of the Peoples Democratic Party (PDP), Yemi Akinwonmi, on Friday presided over the meeting of the party caucus.

TrackNews Online reports that the meeting was held at the PDP National Secretariat.

It was gathered that Akinwonmi is presiding over the meeting despite the presence of Secondus at the same Secretariat.

But reports have it that the embattled PDP chairman did not attend the meeting, choosing to remain at his office.

“I came here this morning and a letter was served on me. Coincidentally, I met the chairman of the BoT and told him and he told me he received a copy of the same letter. I want us to discuss this letter before this meeting starts,” Akinwonmi stated before the commencement of the meeting.

Recall that Justice Umar who is on vacation at the Kebbi High Court gave the order for the reinstatement of Secondus as PDP chairman on Thursday while ruling on suit no: KB/AC/M. 170/2021.

The presiding judge noted that she is satisfied after going through the affidavit of the respondents that an interim order be granted on the purported suspension of Secondus pending judgment.