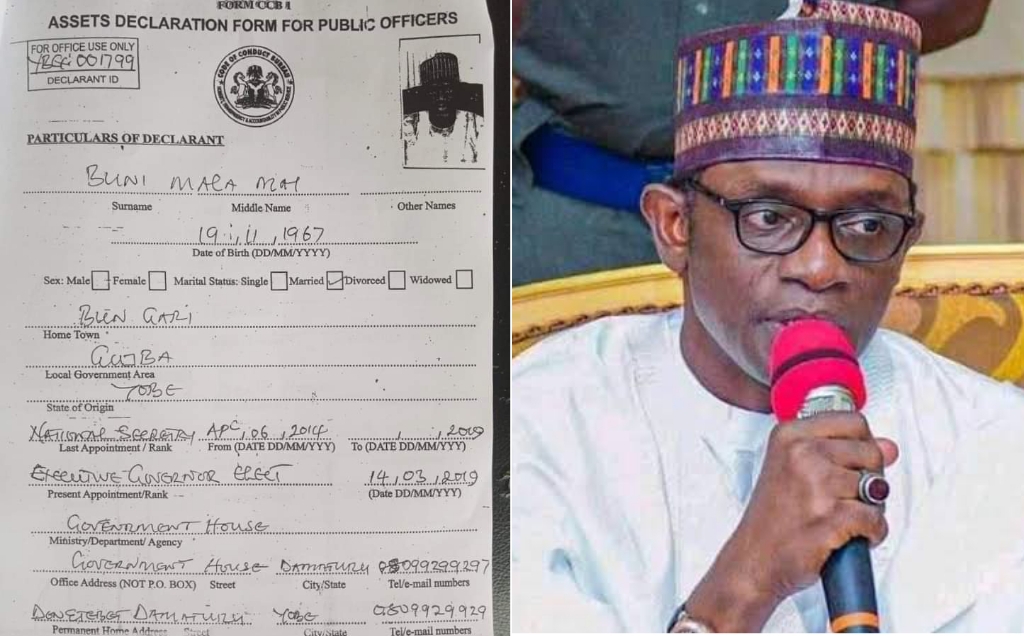 The Nigerian constitution and the CCB/Code of Conduct Tribunal Act make it mandatory for public officers and civil servants across the levels of government to periodically declare their assets.

SaharaReporters gathered that the scandal is being discussed in hush tones in the Yobe State Government House and National Secretariat of the All Progressive Congress (APC) in Abuja.

Buni has been chairing the caretaker committee of the ruling party since the sacking of Adams Oshiomole in June 2020.

Spirited efforts by the governor and his backers to cover up the scandal however failed last week when his pre-tenure form (form CC81), which was deposited at CCB on May 23, 2019, got leaked to President Muhammadu Buhari, the Department of State Security Services (DSS) and National Intelligence Agency, a source told SaharaReporters.

“Though he has immunity but he committed offences contrary to Section 15 of the Code of Conduct Bureau and Tribunal Act, Cap C15 Laws of the Federation of Nigeria 2004 which are punishable under Section 23 (2) of the same Act,” a Government House source said

An analysis of the document submitted by the governor showed he declared having N2 billion as cash in six Nigerian banks.

Further checks showed that the accounts are being operated by one firm, MDG Construction and General Company Limited.

Despite claiming his two main sources of income were farming and business, a closer look at the document revealed that the governor declared 25 buildings in Abuja, Kano and Yobe states valued at N3.1 billion.

Also, Buni declared that he has six farms valued at N591 million in Abuja and Yobe states.

Disbelief is trailing the governor’s claim that he earns N42 million from a farm worth N7 million in Damaturu in the face of Boko Haram insurgency. Three of his cars he claimed are also worth N58.5 million

A source at the CCB told SaharaReporters that investigation of the governor’s anticipatory declaration has gone far at the agency.