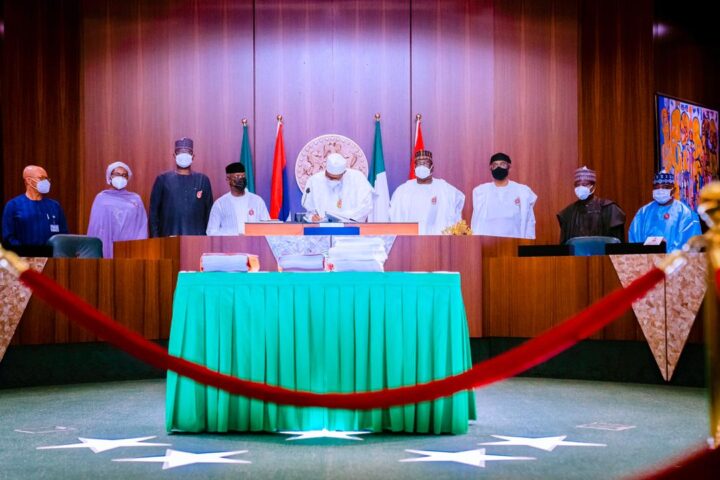 Nigeria’s public debt has been on the rise. Despite securing debt relief during the Olusegun Obasanjo-led administration, successive governments have continued on a borrowing spree — the federal government’s component of the public debt surging 658 percent to N26.9 trillion in the last 21 years.

This has raised concerns among Nigerians on the debt sustainability of the country amid dwindling revenue to meet the debt obligations to creditors.

Defending one of the loan requests, the Debt Management Office (DMO) said it is part of a borrowing plan for the 2021 budget.

As of March 2021, Nigeria’s total public debt has hit N33.1 trillion ($87.24 billion) — an accumulation of borrowings from successive governments, of which most were borrowed since the return to democratic rule in 1999.

The overall public debt is the total debt accrued by federal, states, and the FCT from local and international lenders.

The analyses also include data from the DMO, National Bureau of Statistical (NBS), and fiscal papers from the Budget Office of the Federation.

Data from the DMO seen by TheCable showed that federal government borrowings (local and foreign debt) climbed from N3.55 trillion in 1999 to N26.91 trillion at the end of March 2021 (the country’s latest official figure).

This represents a 658 percent increase in 21 years, comprising the administrations of Olusegun Obasanjo, Umar Musa Yar’Adua, Goodluck Jonathan, and the current Muhammadu Buhari. 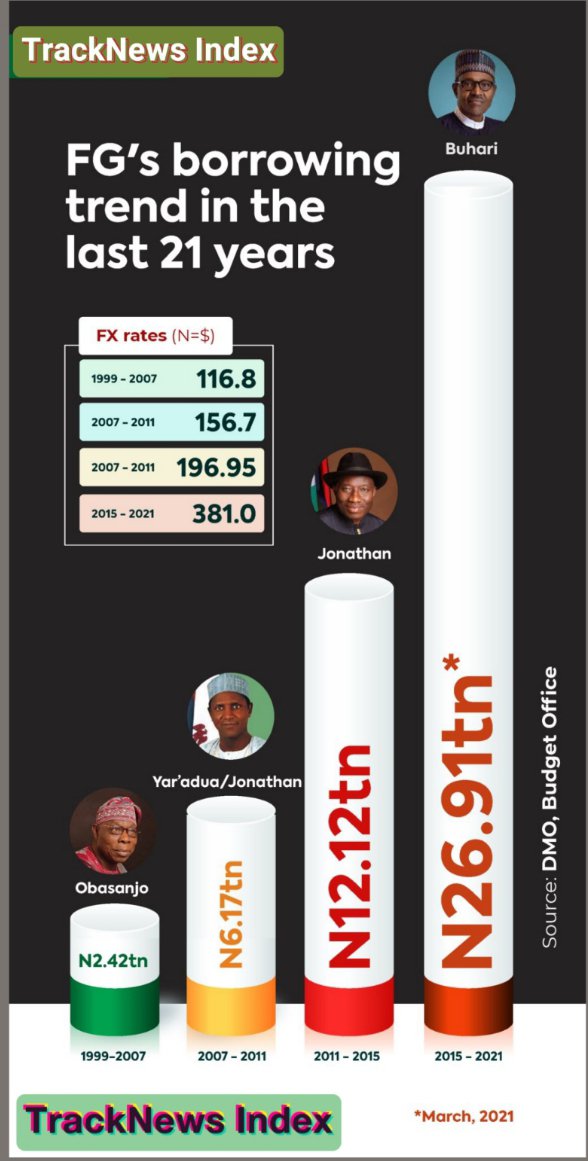 HOW MUCH BUHARI BORROWED IN 6 YEARS

The Budget Office’s medium-term expenditure framework and fiscal strategy paper from 2015 showed that the Buhari-led administration incurred N7.63 trillion in domestic debt from June 2015 to December 2020.

On external borrowings, President Buhari increased debt from $7.3 billion in 2015 to $28.57 billion as of December 2020. This means that the president incurred $21.27 billion on foreign loans to the country’s debt portfolio.

Analysis of consolidated debt showed that the external debt increased by 291.37 percent while domestic debt grew by 86.31 percent in the last six years of the Buhari government.

Overall, the Buhari-led government has had an accumulated debt of N17.06 trillion as of March 2021, using the N381 exchange rate. This represents a 173.2 percent increase from when he was elected president in 2015. 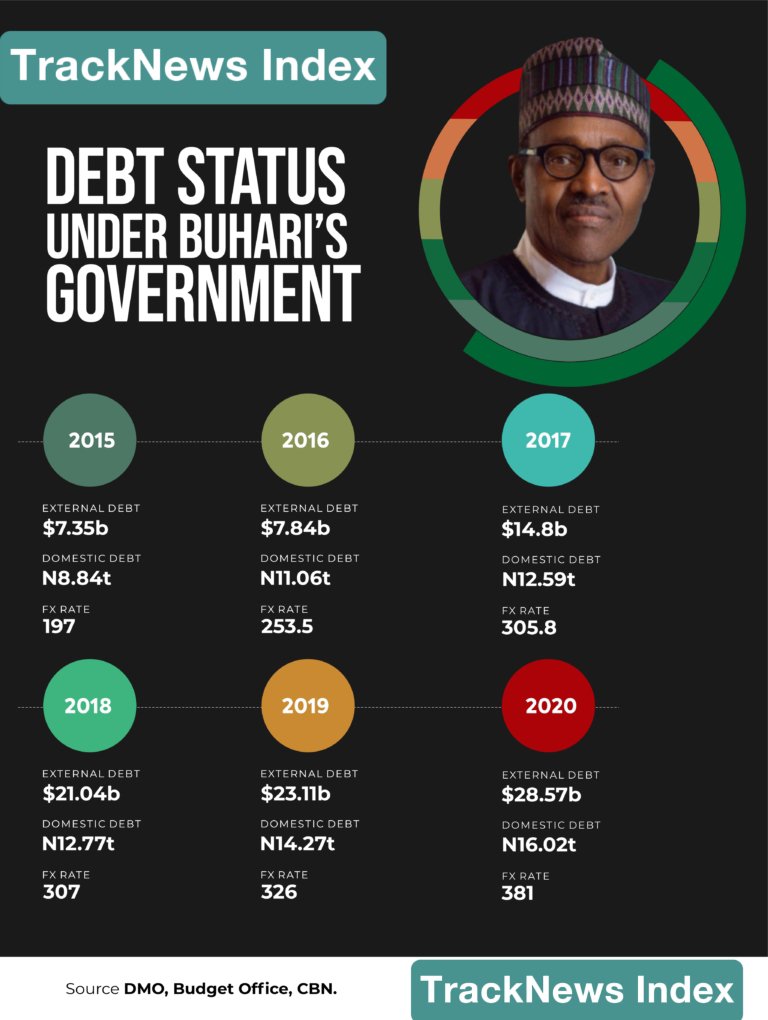 At the beginning of former President Goodluck Jonathan’s tenure in 2011, the federal government had an accumulated debt of N6.17 trillion.

Analysis of the debt figure showed that local debt amounted to N5.62 trillion while foreign debt stood at $3.5 billion (about N548.65 billion, using the exchange rate of N156.7/$1).

By the end of 2015, the foreign debt component hit $7.3 billion, while domestic debt increased by N8.4 trillion. The country’s exchange rate also stood at N197/$1.

Overall, the federal government component of the total public debt increased from N6.17 trillion in 2011 to N9.8 trillion in 2015, representing an increase of N3.63 trillion or 58.8 percent. 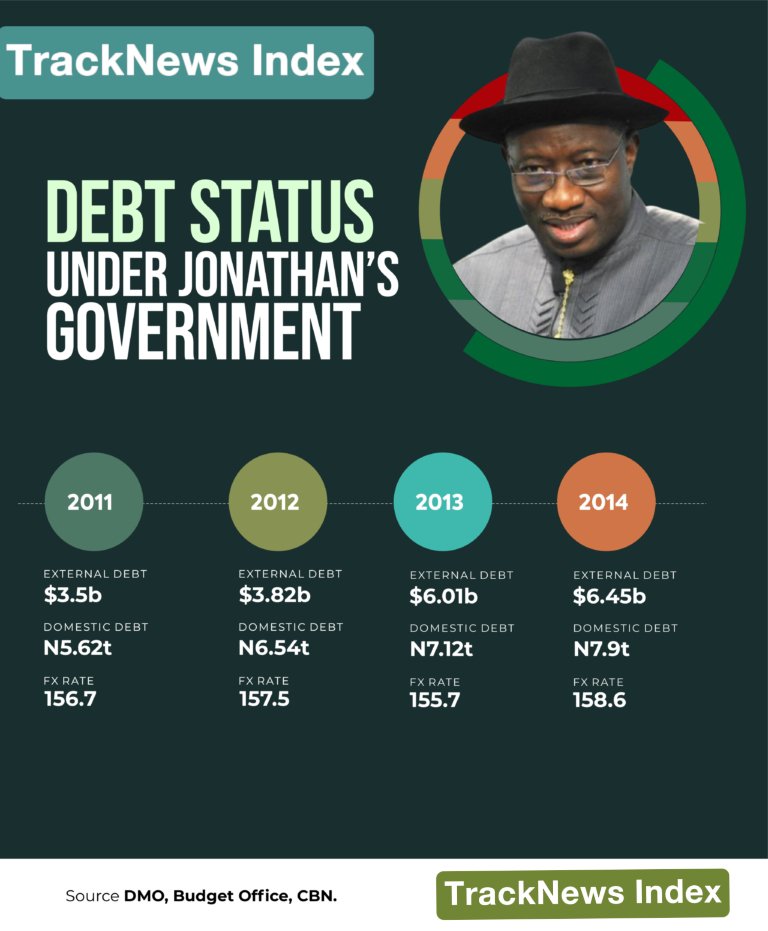 Under the Umar Musa Yar’Adua/Goodluck Jonathan-led government between 2007 and 2011, domestic debt of the federal government moved from N2.17 trillion to N5.62 trillion. The foreign component of the debt also increased from $2.11 billion to $3.5 billion within the period.

Of the debt figure, Jonathan completed the tenure from May 2010 to May 2011 after the death of Yar’Adua. The period saw a surge in the federal government’s debt from N4.94 trillion to N6.17 trillion. This represents a 24.9 percent increase in one year. 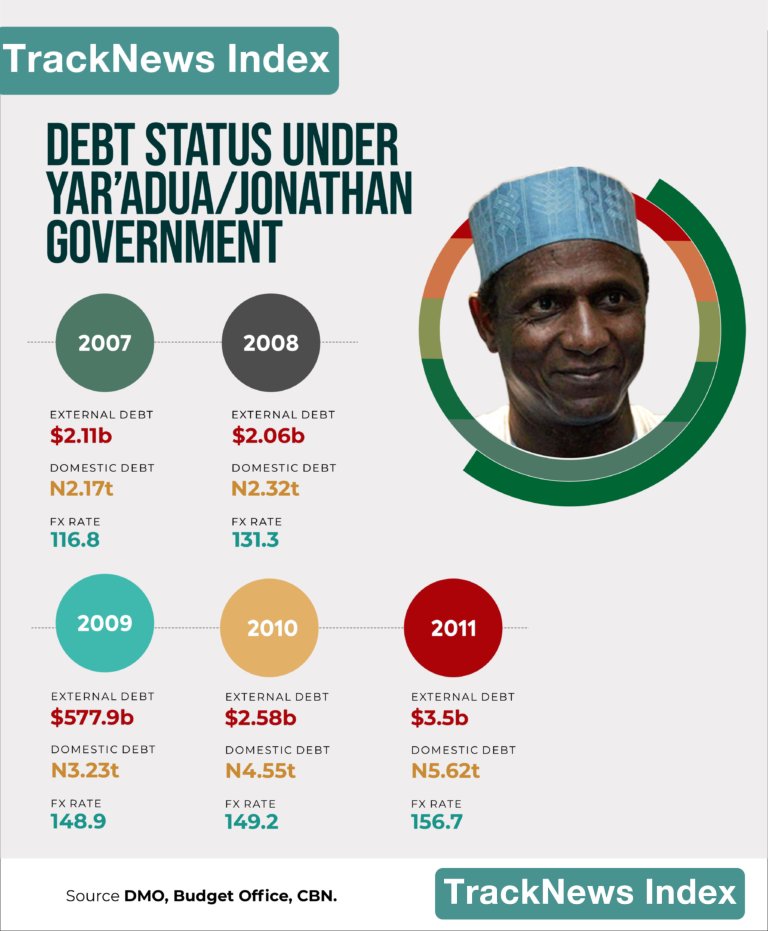 During the tenure of former president Olusegun Obasanjo, the debt level of the federal government reduced from N3.55 trillion in 1999 to N2.42 trillion at the end of 2007.

The 8-year term of Obasanjo resulted in a dip in FG’s local and foreign debt level, representing a 31.8 percent decline.

The country’s exchange rate was between N98.02 to N116.8 to a dollar during the tenure.

Analysis of the figures showed that external debt decreased from $28.04 billion by 1999 to $2.11 billion at the end of 2007. However, the domestic component increased from N798 billion to N2.17 trillion within the same period.

The huge decline in foreign debt was a result of the substantial reduction following the pay-off of the outstanding debts owed to the London Clubs of Creditors in the first quarter of 2007. 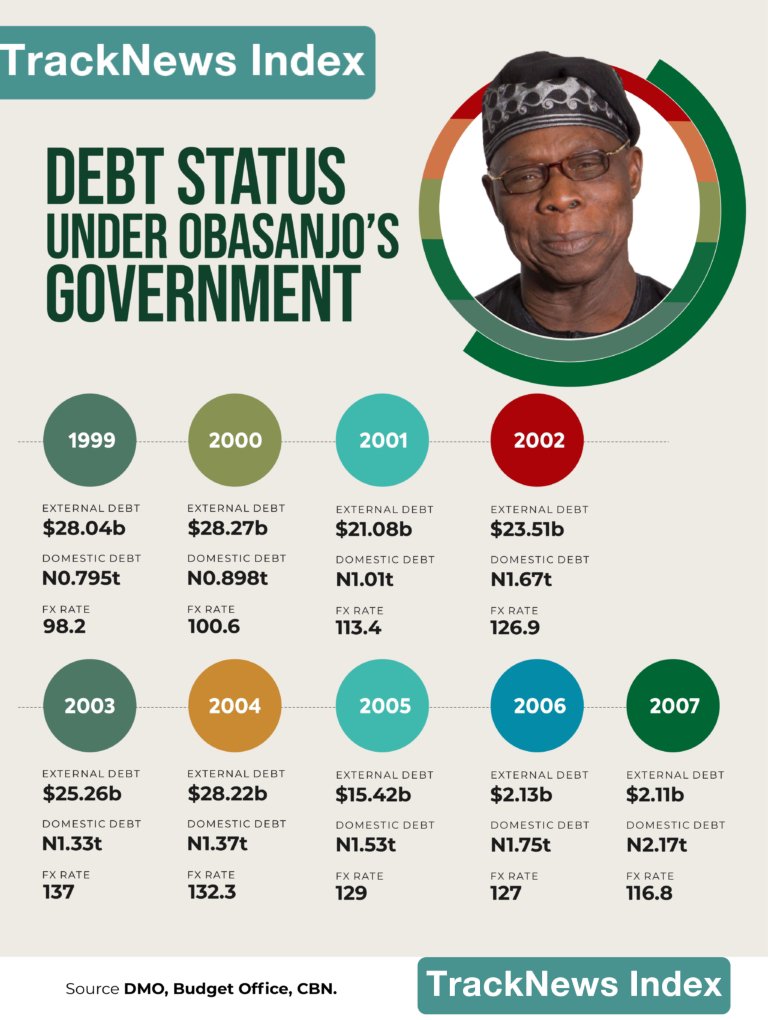 So far, Buhari is the country’s biggest borrower, increasing public debt (FG component) by more than 173 percent. Next to the Buhari government is the Yar’Adua/Jonathan administration with a 155 percent surge in borrowing.

The current government violates important financial laws in the country — the Fiscal Responsibility Act, and the CBN Act 2007.

Last year, the government exceeded the fiscal borrowing threshold as stipulated in the fiscal act.

Zainab Ahmed, minister of finance, budget and national planning, admitted to this on the grounds that COVID-19 was good enough reason to breach the act.

The fiscal responsibility law provides a limit of three percent debt threshold for sustainability, but the president can “exceed the ceiling if there is a clear and present threat to national security or sovereignty of Nigeria”.

In 2020, the country’s budget deficit was at about four percent of GDP, clearly breaking the law.

By the end of 2020, CBN overdrafts to the Buhari government exceeded the limit by 69 percent of the revenue generated in 2019 – in a blatant violation of the apex bank rules. The government’s revenue in the year was N4.1 trillion, and overdraft stood at N2.9 trillion.

Also, Nigeria’s borrowing limit as a percent of GDP stood at 34.8 percent in 2020, well above 25 percent for the year. Earlier this year, the federal executive council (FEC) had strategically raised the borrowing limit to 40 percent in its Medium-term debt management strategy for Nigeria for the period 2020-2023.

While Nigeria’s debt-to-GDP is lower than those of its peers, its debt-to-revenue is too low to sustain the country. Of every N100 government makes in revenue, N97 now goes to debt servicing.

In the last four administrations, only Obasanjo’s team reduced public debt; his government recorded a 32 percent decline with the London Club agreement.

While borrowing is required to support the economy, sustainability transparency and sustainable repayment plan are crucial.

Femi Oke, an economist, said Nigeria’s soaring high debt profile is not good for the country.

“The Nigerian government borrows in the worst possible way and in a very outdated manner. This causes a backlash to the government. Because Nigeria’s debts are not linked to any assets, we just go to the treasury bill market and borrow, at any rate, that anybody wants to give you,” he said.

“There are many other countries who borrow more than what Nigeria is borrowing and don’t have any problem paying back. They borrow intelligently and efficiently, in a way that their debts service themselves.

“A more efficient way of borrowing is for the Federal Government to migrate all the debts to asset-linked debts. This means structuring the borrowing transaction like investments. There must be an underlying asset to which borrowers can use to recover the principal they gave the country plus profit.”

Vahyala Kwaga, senior researcher and policy analyst at BudgIT, said the level of borrowing – specifically in 2021- is the highest it has been in the last six years.

“The government is borrowing more, spending more and earning less revenue. For context, the government budgeted about N5.37 trillion in revenue in 2020 but only earned a total of N3.42 trillion,” Kwaga said.

“There is also no commensurate rise in revenue to counteract the continuing rise in debt servicing. A casual look at the debt servicing level from 2015 to 2020 shows that the level has steadily increased since then.

“These amounts include debt servicing on interests for ‘ways and means’ and ‘sinking fund to retire maturing Loans.’”

NIGERIA’S ACTUAL DEBT COULD BE 48.7TRN

Wilson Erumebor, a senior economist at Nigerian Economic Summit Group, said Nigeria is a case where expenditure keeps rising, revenue not improving as expected, creating a wide fiscal deficit that is majorly financed by borrowing.

“While borrowing is required to support the economy, especially given the impact of the pandemic, what we need to be concerned about is how sustainable Nigeria’s debt position is,” he said.

“When we include AMCON’s liabilities and CBN’s ways and means, debt could amount to about N48.7 trillion, which is around 32 percent of GDP.

“Debt to GDP may seem quite low at 32 percent, we must understand that debt is serviced with revenues, so if debt servicing is increasing and revenue is not performing, then we have a problem.”

“We must work towards unlocking many sectors and many areas where the country can earn revenue.”

“Stress scenarios confirm the vulnerability of public debt to a low growth/wide primary deficit scenario. The interest-to-revenue ratio is particularly vulnerable to a real interest rate shock but remains sustainable.”

“However, we reiterate our position that the FG’s debt service cost as a percentage of revenue is a fairer reflection of the country’s debt sustainability position.”

At an overall public debt of N33.1 trillion ($87.24 billion), the implication remains that every Nigerian owes both local and foreign organisations N165, 500.

Related Topics:From Obasanjo to Buhari… how FG’s debt profile surged 658% to N26.9trn in 21 years public debt
Up Next

NNPC made ₦2 trillion in one year selling fuel: Report