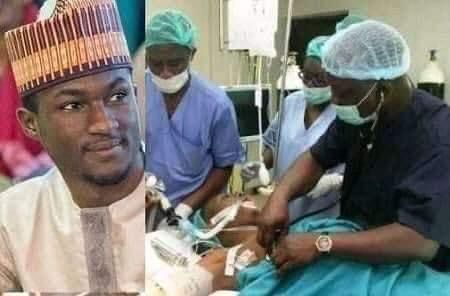 TrackNews Online can recall in December 26 2017 The presidency on Wednesday confirmed that Yusuf had been involved in a bike accident in the capital Abuja. He is said to have broken a limb and sustained a head injury.

He had subsequently undergone surgery at an Abuja clinic and was said to be in stable condition. The latest development indicates that there is the need for further attention.

After the successful surgery in abroad here is sad pay back of the young Doctor who first took care of Yusuf Buhari in Abuja Hospital.. Here is the sad.

When Yusuf had an accident at Gwarinpa with his power bike, he was rushed to Nisa Premier. There he met Dr Obafemi who was a one of the most junior doctors at the facility. Dr Obafemi didn’t know he was Yusuf and didn’t bother to know. All he knew was that he is a son of “somebody” for him to have been escorted by Police men. He sought to give him the best treatment primarily as a patient.

After brief examination, he realised that Yusuf was an orthopeadic case and their facility was not one. He called his HOD who didn’t pick his calls and later called Wada, the owner of the facility. None picked his numerous calls. When he realised Yusuf would die if he doesn’t refer him to an hospital where he can get the best care he referred him to Cedar Crest (where he knew are into such treatment).

Shortly after Yusuf was sent to Cedar Crest, news got to Wada and the HOD that a ‘big fish’ was at their hospital, they all came in hurriedly to devour the loot. On getting to their hospital reality dawned on them that “bloody Dr Obafemi has transfered Yusuf”, they were mad!

Their madness led to the sack of Dr Obafemi for having the audacity to transfer a patient without their authorisation.

Fortunately for Dr Obafemi, there was a lady that works at Nisa Premier whose husband works at Cedar Crest. They discussed the issue at home and the husband told their boss about the sack of the doctor that brought their ‘gold mine’ to them. The CMD of then called Dr Obafemi to offer him a job.

The doctor was earning 120k at Nisa Premier and it was increased to 150k at Cedar Crest.

Seeing life was unfair to him, Dr Obafemi gathered money together to go and write PLAB in UK with the mind of relocating abroad (mind you he graduated at 24 from Uni Ilorin, so he was very brilliant). Majority of the money he got were loan from the bank, to be paid back with interest – as his salary could barely feed and provide accommodation for him. Mind you, to write PLAB you will need nothing less than 2.5M, as at then, for the exams, flight and accommodation.

He was not giving enough leave to study for PLAB because he worked in a private hospital, so he failed PLAB. The news of his failure, plus the army of creditors who daily hunt him for their money got to him and he checked into an hotel in Suleja and committed suicide.

The hotel guys realised he was not coming out at 12pm and wasn’t responding to their knocks on the door, so they called the Police who opened the door and found him dead, with his certificates in a file and a suicide note apologizing to his parents.

He was from a lowly background, so he wanted to change their lives after becoming a doctor and realized the system (Nigeria) was constantly against him. Even though we wouldn’t do that but our level of tolerance differ.

That was the brief story of the doctor that made it possible for our “jobless boy” to ever dream of celebrating wedding.

Some of the several consequences of our dysfunctional system that have sent many to their untimely deaths and may the gentle soul of this young man continue to rest in perfect peace.