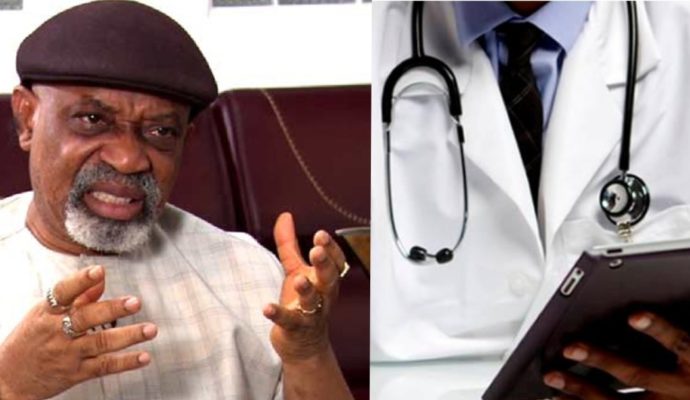 •••Mr Ngige said striking doctors will not be paid for the period they are on strike.

The Minister of Labour Chris Ngige has said he would not waste his time meeting to dialogue with striking doctors.

While President Muhammadu Buhari was on medical vacation in London, the National Association of Resident Doctors (NARD) declared an indefinite nationwide strike on August 2.

NARD is demanding the federal government implement the Memorandum of Understanding entered into in March 2021 on the welfare and other issues that affect its members.

Mr Ngige, in an interview with Channels TV on Friday, said he has other things to do and will not waste time meeting with striking doctors.

“I have other things to do.

I did two conciliations again yesterday.

Am I going to keep wasting time with them?” Mr Ngige asked.

“As of the 22nd (of July), they said they were happy; they were praising me, saying I am kind, I am compassionate, advising public servants in Nigeria to behave like me.

Where government officials are wrong, I tell them, and I give them an ultimatum and timeframe to perfect whatever it is, so why do you go on strike one week after?” he added.

Mr Ngige further said striking doctors would not get paid for the period they are on strike.

“I have communicated it to NARD.

They will not receive money for the period they are on strike, and it will never count as a period for a pensionable position in their career,” he said.

Though Mr Buhari has continued to enjoy good healthcare abroad from taxpayers money, six years into his regime, health workers have embarked on strikes on different occasions, demanding better welfare.