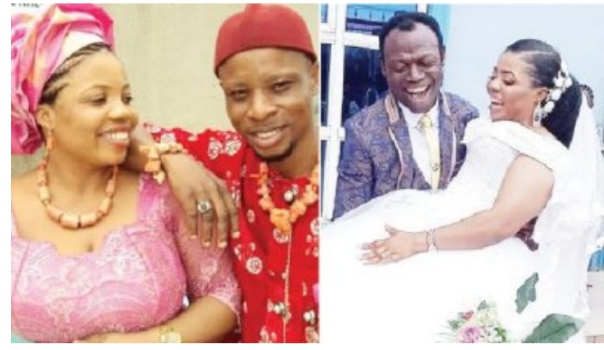 A man, Bright Ben, has accused his pastor and General Overseer of the World Bank Assembly in Eneka, in the Obio-Akpor Local Government Area of Rivers State, Moses Adeeyo, of snatching his wife, Tina.

Bright claimed that trouble started after his wife of 12 years was made an assistant choir mistress in the church and she moved out of the house with their two children.

The aggrieved husband said he had been searching for her and called the pastor to seek advice on the matter.

He stated that he knew his wife’s whereabouts on Sunday when he saw pictures of her remarriage.

Bright, in a Facebook post with photos of the alleged marriage of his wife to the cleric, wrote, “As shameful as it sounds, it is a true-life story. My pastor married my wife. I’ve been married to Mrs Tina Bright for over 12 years with two children. I introduced her to my General Overseer of the World Bank Assembly in Eneka, Obio-Akpor Local Government Area in Rivers State. We started attending the church and became full financial members.

“My wife was given an immediate appointment (assistant choir mistress) seven months ago. She moved out of the house with our children before I got back from work. I searched everywhere and called everyone, even the general overseer. Unknown to me, the G.O. was the architect of my problems.

“After some time, he stopped picking my calls and blocked my number. I’ve been looking for her until I saw these pictures yesterday online. He claimed that the Holy Spirit told him that she is his wife. Is the Holy Spirit an author of confusion? My wife of 12 years is now his.”

You’re a liar, you assaulted, sent me packing – wife

In her reaction, Tina, who also took to social media, said she left her husband over alleged assault and maltreatment.

She said, “Bright wants to make me a bad woman on social media. When we were together, he made me incur a lot of debts that I am still paying. He accuses me of infidelity and even disallowed me from pursuing my music career. He once told me that there is no marriage between us and that I am just here to take care of his children. He promised to make my life miserable, including putting acid in my cream. Now, he’s coming on social media to destroy another man’s name. It is my time to shine.

“He is lying that he doesn’t know my whereabouts. I left his house after he locked me inside the house and kept the keys in his pocket. It was then I packed my things and told him it was over. He even told me to leave and that I was only useful for the children. My children got the spare keys, gave them to me and told me to escape at night. On the morning of November 28, 2020, I came to the house with a taxi, packed my load and took my children away. I put my children at my mother’s place and went to Lagos to start my life afresh.

“I was never residing with the pastor. He lived on the church premises and I lived in Lagos. Ben kept calling me while I was in Lagos before I blocked his number. He threatened me not to ever marry another person.”

“When Bright came to my house to ask for my daughter’s hand in marriage, I saw him as a son and asked if he was a Christian. I took him to the village according to the tradition. He gave everyone their rights both men and women except the bride’s parents. When they told him to come and see us he said he’ll see us later,” she stated.

Bright, in a video clip, denied assaulting his wife.

He also refuted accusations by her mother that he did not pay her bride price, saying he did during their traditional wedding.

He insisted that he had not been divorced from his wife and wondered why if she wanted to re-marry, it would be to the cleric, whom he always shared his marital problems with.

The pastor’s son, Peter Adeeyo, told PUNCH Metro that his father had yet to divorce his mother.

He said he was as shocked as everyone when pictures of the wedding surfaced on the Internet.

“He said he doesn’t want my mother again. The case over the settlement of my mother has been in court for over one year. My mum was in Abuja when she saw the wedding pictures. Someone called my attention to the pictures when we closed from church on Sunday. My father didn’t inform any family members of the wedding. My dad is telling the world that he has divorced her and that is a lie,” he added.

The pastor did not pick his calls, as his phone rang out and text messages sent to his phone number were not responded to as of the time of filing this report. (Punch)

Related Topics:Man tackles Rivers pastor for allegedly snatching wife Tina and Bright & Tina and the pastor
Up Next

Man Cries Out After Girl He Took Home From A Club Refused To Leave After Two Days: