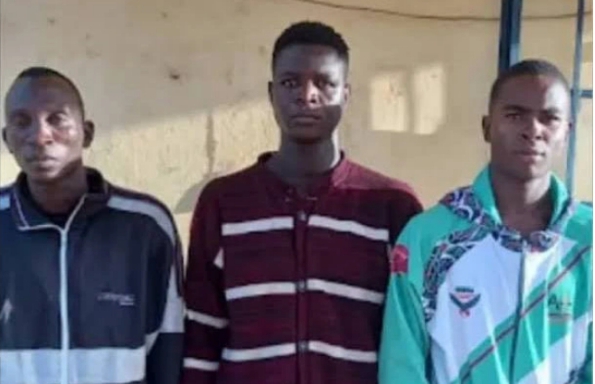 A student of the Federal Polytechnic, Mubi, Adamawa State, Mumini Abubakar has been arrested for allegedly killing his girlfriend and buried her corpse in a shallow grave, reports The Gazelle News.com.

According to the Adamawa State Police Command, the student committed the crime allegedly in connivance with Huzaifa Shuaib and Rabiu Adamu.

Abubakar impregnated his girlfriend, Franca Elisha, a Diploma student of the Department of Library Science in the same polytechnic. When he learnt of the development, he insisted that the pregnancy must be aborted.

He thereafter took Franca to his room in the students’ community behind the state University for the abortion on Friday, 6 August, 2021.

He invited his friend, Huzaifa Shuaibu, a student of College of Health and Technology, Mubi who administered a lethal dose of drugs and injections to remove the foetus in Franca’s womb.

The late Franca passed out after taking the first dose of injection but later regained consciousness. However, in order for the foetus to be removed completely, Shuaibu administered another dose of the injection which led to Franca going into coma and never regain consciousness.

Another friend, Rabiu Adamu was invited to assist in the burial and the victim was buried in a shallow grave alongside with her phone and national identity card.

Her parents reported her disappearance to the police who commenced investigation and discovered the wicked plot woven together by the three friends.

Related Topics:Burries Her In Shallow Grave With Her PhoneNational ID CardPoly Student Kills Pregnant Girlfriend
Up Next