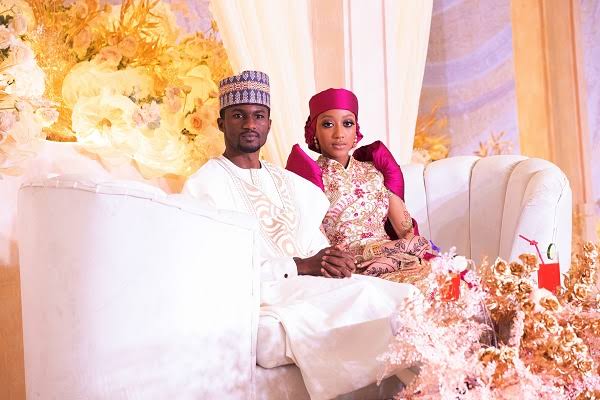 Yusuf Buhari, the only Son of President Muhammadu Buhari spent over a billion Naira on the souvenirs gifted to over 700 guests that honoured his wedding ceremony held last weekend.

The wedding which is unarguably the most expensive wedding in Sub-Sahara Africa was historic as each of the guest went home with a branded, customize and expensive souvenir which contains a customize iPhone 12 Pro Max the latest brand of iPhone with current nigeria market value at N989,000, Apple iPad at the cost of N645,000 with many others.

TrackNews Online correspondent at the dinner where the souvenirs were distributed reports that each pack of the souvenir with its contents will conservatively cost N1.7million thereby making the total spending for just the souvenirs to stand at over N1billion. President Buhari is known to live a frugal life and has preached modesty in governance but as at the press time, the President is yet to comment on a show of affluence and obscenity displayed by his family member not known for any meaningful livelihood.
This is happening at a time when millions of families cannot afford to eat, pay hospital bills and cannot afford decent education for their children.
According to a commentator, “sadly this is a President that cannot afford to finance his presidential campaign in 2015, a President that is rated with his family as the poorest prior to 2015 and under a government that claims to be fighting corruption.

“Where is EFCC & ICPC? How did Yusuf Buhari and his family got all this money from? Is Buhari, hitherto regarded as incorruptible leading by example? Is that not insensitive? This is arguably the most expensive wedding in the history of Nigeria. Even Africa’s richest man, Aliko Dangote could not spend that much during the wedding of his daughter. What a shame! What an indictment! Who is deceiving who in Nigeria?”

Meanwhile, the spending continued on Monday where the newly wedded couple organised a luncheon attended by President Buhari, his wife, Hajiya Aisha Buhari and the Vice President, Prof. Yemi Osinbajo, among other dignitaries. The event, which was held at the Banquet Hall of the Presidential Villa, Abuja, was the concluding part of the marriage ceremony between the son of the president, Yusuf and his new wife, Zahra, which started on Friday.

Yusuf took Zahra, daughter of the Emir of Bichi, Nasiru Ado Bayero, as wife at a ceremony in Bichi, Kano State, on Friday.

The wedding Fatiha was conducted at the Emir’s Palace with the Minister of Communication and Digital Economy, Dr Isa Ali Pantami, presiding, after payment of N500,000, as dowry.

Alhaji Aminu Dantata stood as representative of the bride, while Alhaji Mamman Daura, stood for the bridegroom during the wedding Fatiha.

Pictorial reports from the colourful event indicated many dignitaries, including wives of foreign heads of state were in attendance.

Among those in attendance were the wife of the vice-president, Mrs Dolapo Osinbajo; Senate President, Senator Ahmad Lawan; Secretary to the Government of the Federation (SGF), Mr Boss Mustapha; Chief of Staff to the President, Prof. Ibrahim Gambari.

The father of the bride, Emir of Bichi, Nasiru Ado Bayero, some state governors were also in attendance.

Some wives of state governors and the Group Managing-Director of the Nigerian National Petroleum Corporation, NNPC, Mele Kyari, were also sighted at the event.

Related Topics:YUSUF BUHARI SPENT OVER N1BILLION ON SOUVENIRS ALONE IN AFRICA’S MOST EXPENSIVE WEDDING
Up Next