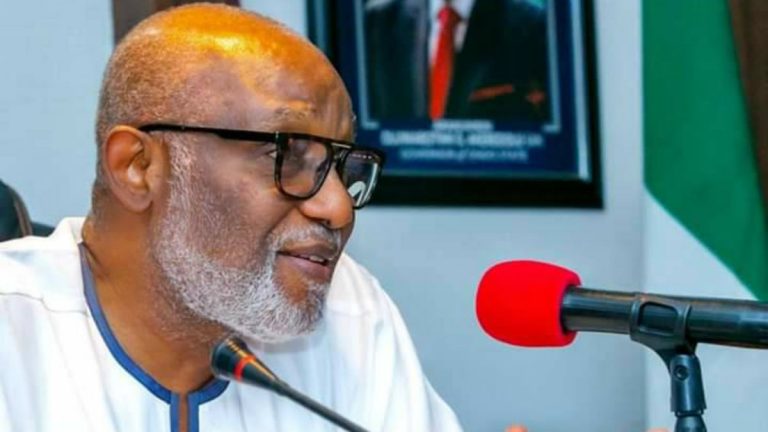 Governor Rotimi Akeredolu of Ogun State has been told to stop misleading his Southern counterparts in their quest for power shift to the region in 2023.

Speaking with newsmen on Tuesday over zoning of presidency to the Southern region of the country, a chieftain of the All Progressives Congress (APC), Garus Gololo, said there was no part of Nigeria’s constitution where zoning is enshrined.

Tracknews Online reports that Akeredolu had earlier reacted to the Northern Governors’ resolution on zoning the 2023 presidency to the southern part of the country.

The Senior Advocate of Nigeria said his Northern colleagues have expressed and indeed exercised their rights under the freedom of expression.

Akeredolu who spoke in an interview with The PUNCH said; “They (northern governors) have expressed and indeed exercised their rights under the freedom of expression. No one can stop them from expressing themselves.”

He, however, said that Southern Governors remain resolute on their demand.

Recall that Akeredolu granted an interview to Channels Television, where he threatened that, any political party that fields a northern candidate for the presidency in 2023 would risk losing the support of southerners.

In his reaction to the Ondo State Governor’s comment, the former Coordinator of Miyetti Allah Cattle Breeders Association, said Akeredolu, as a legal icon should have known better, saying, there was no provision for zoning in the 1999 constitution of Nigeria.

Golo pointed out that Akeredolu who failed woefully to deliver his party at the presidential election in 2019, lacked the moral justification to clamour for power shift to the South in 2023.

He said: “I learnt that Akeredolu is not just a lawyer but he is also a Senior Advocate of Nigeria. Where in the constitution of Nigeria or of any party did he see that zoning is enshrined? He knows so much of our law and I don’t expect him to mislead his colleagues in the south,”

Gololo, however, acknowledged that there are eminently qualified persons in the South, as much as they are in the North, who could take up the leadership of the country.

“But that could only be achieved through dialogue, diplomacy and negotiations. No one rides to the position of leadership with threats, intimidations and persuasions,” the APC chieftain said.

Gololo added: “I expected Akeredolu, as a leader from the South West, to guide his people aright on how to lobby for a position such as Presidency of this country and not to be using force. There are some utterances that should not be heard of such a leader.

“I’m not against a southern candidacy, in fact, I have said it before that I would support a credible candidate from the south, but they should go about it with diplomacy and lobbying”.