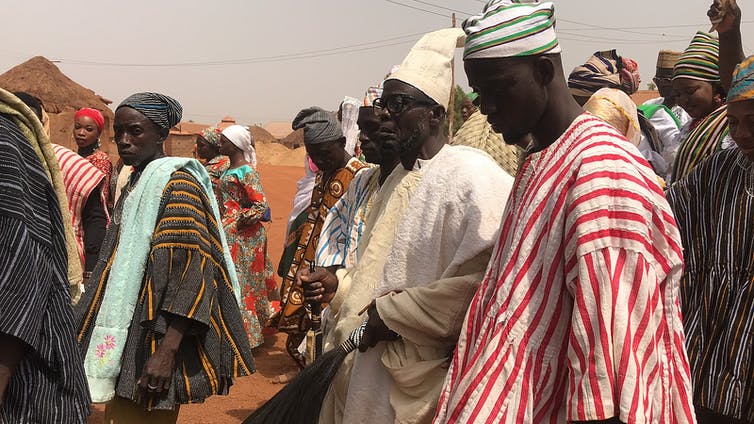 According to Article 270 of Ghana’s 1992 constitution, the chieftaincy institution is recognised as part of the country’s governance system.

Chiefs settle disputes and govern community lands. They are custodians of customs and tradition and are advocates for development in their areas. The chieftaincy institution is still largely supported by many Ghanaians and modern governments. The importance of chiefs to the government is clearly seen in the work of the Committee of Eminent Chiefs, which the government set up and supported to resolve the long-standing Dagbon chieftaincy conflict.

They include the Dagbon, Bawku, Bimbilla, Bolga and Bole chieftaincy conflicts.

In our new study, we used two protracted chieftaincy conflicts in northern Ghana (Bawku and Bimbilla) to explore the complex causes of these conflicts. We aimed to provide a nuanced understanding which could contribute to finding solutions to the conflicts.

Our study shows that beyond the contest among royals, chieftaincy conflicts involve other actors. They are caught up in the quest for political power and not just based on historical or ethnic rivalries. Political elites, youth groups and local politicians have all influenced and manipulated chieftaincy conflicts for their own agendas. Traditional and political contestants use each other. The result is that trust in both the state and the traditional institution is declining.

In our study we interviewed community members, factions from rival parties and members of security agencies like the police and army. We also drew on data from archival reports, news reports, journals and books.

Our study found that chieftaincy conflicts are the result of numerous processes of actor networks and alliances developed through time. They are not just a reflection of divergent perspectives within social structures like social ties, family and tribal relations or history.

In order to understand chieftaincy conflicts, it is necessary to identify the individuals or parties involved, as well as their networks and resources. The Bimbilla and the Bawku conflicts clearly show the role that politics and external intrigues play in fuelling conflict. This is what we call the actor constellation.

For instance, the Bawku conflict is an inter-ethnic conflict involving two large ethnic groups, the Kusasi and the Mamprusi, over the Bawku skin (throne). It began in 1951 as a result of a dispute between rival royal houses which both lay claim through the patrilineal inheritance system.

The Bimbilla conflict involves two families within the same ethnic group over who has legitimacy over the Nanun skin. The chief is decided on a rotational system between two families (referred to as gates), namely the Bangyili and the Gbomayili. It is a more recent conflict, arising from the death of then paramount chief Naa Abarika of the Bangyili gate. The dispute over succession has led to several violent clashes and a Supreme Court ruling.

Our study confirmed the presence of multiple actors in chieftaincy conflicts who come with different interests, introducing their own agendas and attempting to enrol other actors onto their side. They don’t only organise themselves along ethnic lines, they also recruit politicians and state officials into their networks.

People who are not even closely related to the chieftaincy contest take an active interest in these conflicts and become embroiled in the escalation of violence. In the Bimbilla conflict for instance, the ethnic group known as the Nanumbas, who are not royals, support at least one group against the other. Violent attacks often involve people who are neither biologically related to the skin nor have right of ascension, but support a faction. For example, there is subtle support by the largest opposition party in the country, the National Democratic Congress, for the Bangyili gate while the governing New Patriotic Party supports the Gbomayili.

Similarly, the Bawku chieftaincy conflict has seen the involvement of various actors including politicians, different ethnic groups and businessmen. The conflict is beyond ethnicity or the rightful heir to the skin. Since independence, the two factions in the conflict have received backing from administrations linked with different political ideologies. The Kusasis have been supported by the National Democratic Congress as leading members of the group have remained within that party. Leading politicians from the New Patriotic Party, who are prominent among the Mamprusi, have supported the group financially and with state power.

Political elites, youth groups, and local politicians in northern Ghana have all used chieftaincy conflicts to further their political and economic goals with reasonable levels of success. Political actors recognise that chiefs are crucial allies in winning elections. And it goes both ways. Candidates for chieftaincy positions rely on the backing of local and national leaders to help them achieve control over a traditional area.

This association, however, has come at a cost. The reverence for chieftaincy is under threat in so far as subjects consider chiefs as political tools. And conflicts persist. The ultimate danger is the weakening of state institutions and the continuation of violence which invariably affects development and democracy.

In resolving chieftaincy conflicts and stopping their politicisation, the various houses of chiefs should be empowered and be the only institution for handling chieftaincy issues. Secondly, there is a need to codify the lines of succession in Ghana. Finally, there must be sanctions against politicians and others who interfere in chieftaincy, which is protected by the constitution.

This article is republished from The Conversation under a Creative Commons license. Read the original article.

Related Topics:Chieftaincy Conflicts in Ghana are Mixed With Politics: What’s at Risk?
Up Next