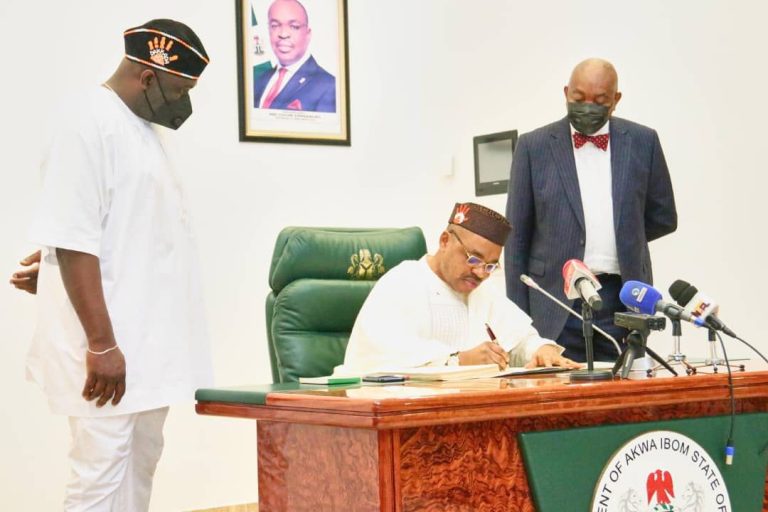 Following the resolution of the Southern Governors Forum against the open grazing of cattle, Governor Udom Emmanuel of Akwa Ibom State has signed the Anti-Open Grazing Bill into law.

Recall that the state House of Assembly has passed the bill into law on Tuesday during its plenary, presided over by the Speaker, Aniekan Bassey.

The assembly, however, allowed the establishment of ranches and livestock administration in the state, after it adopted the recommendations of the Joint House Committee on Agriculture and Natural Resources, Lands and Housing.

During the signing at Exco Chambers Government House on Wednesday in Uyo, Governor Emmanuel said the open rearing and grazing of livestock has been banned in the state.

The governor added that a task force will be set up to monitor enforcement as defaulters will pay a fine of N10 million naira as stipulated in the bill.

Emmanuel stated that the bill will promote modern techniques of animal husbandry, promote job opportunities and expand the value chain in livestock business as well as promote international best practices in the state.

The governor added that the bill will promote the production of high quality livestock in the state as well as promote international best practices.

He further said that the bill will promote the growth of livestock farming and prevent the destruction of farms, crops settlements and homes caused by open rearing across the state.

Tracknews Online reports that the signing was witnessed by the Deputy Governor, Speaker State House of Assembly, Attorney-General and Commissioner of Justice, State Executive Council Members.

Others who witnessed the assent include Chairmen of Boards and Commissions, Permanent Secretaries and Heads of Extra-Ministerial Departments.