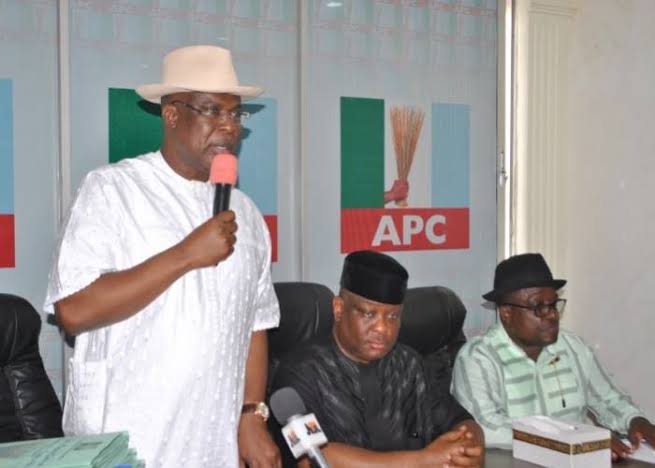 A Chieftain of the All Progressive Congress (APC) in Bayelsa State, Hon. Sunday Frank-Oputu has described as a shame and an open contempt of court the decision by the members of the Party loyal to the Minister of State for Petroleum Resources, Chief Timipre Sylva to conduct the last Saturday ward and local government congresses despite a subsisting court order at the State High Court and the Court of Appeal in Port Harcourt, Rivers State.

According to Frank-Oputu, the conduct of the ward and local government congresses is a clear affront to the rule of law and disrespect to the order of the court, dissociating the loyal party members from the actions of the Minister of State for Petroleum Resources, Chief Timipre Sylva and the suspended caretaker secretary of the Party in the state.

Hon. Sunday Frank-Oputu, who is a chieftain of the APC in Southern Ijaw local Government council loyal to the faction led by Hon. Ebierien Itubor Fala called on the party leadership to sanction the Minister of State for Petroleum Resources, Chief Timipre Sylva and the caretaker State Secretary of the Party, Alabo Martins over conduct of the congresses against subsisting Court order.

According to Frank-Oputu, “ In Bayelsa we had an interlocutory injunction subsist. And as a law abiding party members we were not part of the sham conducted and called congresses. It is shameful and unreasonable that Chief Sylva because of ambition will go against the court order and tender his prepared lists to the national leadership. We learnt that they have arranged with some members of national leadership to accept the illegality and money will be paid.”

“We are warning in strong terms, they should not drag Bayelsa to the repeat of what happened in Rivers State and Zanfara states. I am also warning the national if they mean well for the party to sanction Sylva and his cohorts for disobeying court and doing what no one has ever done in the history of politics in Nigeria. “

Frank-Oputu said the punitive measure against Sylva and Alabo will clear the allegation against the party leadership that the illegal conduct of the congresses was carried out with the connivance of the National Caretaker Chairman of the Party and Governor of Yobe state, Mai Mala Buni due to gratification,” the party’s reputation is at stake and the party should redeem its image by doing the needful to those who perpetuate these illegalities.”

He called on party loyalists in the state not to be daunted by the actions of Chief Timipre Sylva and his cohorts, the people of Bayelsa and the true progressives within the party should not be discouraged. They should be encouraged that the best is yet to come.”

Related Topics:a sham and against subsisting court order—APC ChieftainAllege Conduct of wardLocal Government congresses in Bayelsa
Up Next

PGM Congratulates Gov. Diri, Lawrence And Dickson On Their Awards Of Recognition