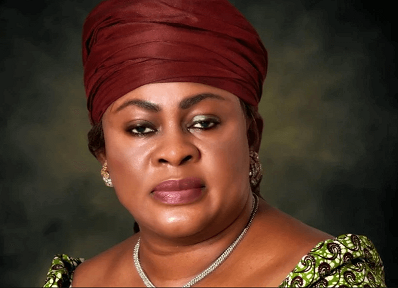 Senator Stella Oduah (Anambra North) has said no person or political party can stop the All Progressives Congress (APC) from winning the November 6 governorship election.

She promised to deliver the zone to APC and the governorship candidate, Senator Andy Uba during the election.

The Senator spoke during the APC stakeholders meeting in Awka, the state capital.

She called all the leaders and aggrieved persons to close ranks for the party’s victory.

According to her: “We are committed to deploying everything in our arsenal to ensure victory for the APC in Anambra North come November 6(2021) and this is not a contest I take lightly, as I have immense respect and confidence in the ability of Senator Andy Uba to turn, and position, Anambra to a state every Anambrarian can be proud of.

“That being said, I am making a personal commitment to ensure victory for our great party and the work has already begun, in the way and manner our various support groups, NGOs and teeming supporters spread across the length and breadth of Anambra North have already been deployed in a massive polling unit to polling unit campaign drive.”

Oduah, who was represented by Princess Nwaka Ononuju, said they were not leaving anything to chances in delivering Uba at the poll.

Oduah, famed for her aggressive Neighbour to Neighbour campaign strategy which aided President Goodluck Jonathan to power in 2011, described her defection to the APC “as a well thought out move, which had the best interests of our dear state as paramount.

” For far too long, Anambra has been unfortunate to have political parties at the helm of its affairs that are alien to governments at the centre, which invariably meant that the dividends of democracy that should accrue to it, have not really trickled down as they should.

“We have been too disconnected from the centre, to the point where everything we ever got were either through the personal efforts of individuals like Senator Andy Uba, our party candidate, or an almost slavish arrangement that meant we had to go cap in hand(begging).”

She urged aggrieved members of the party to close ranks saying “especially at this material time our state is experiencing an existential threat that would require the input of all well-meaning Anambrarians to save it from the quagmire it currently finds itself in.

Related Topics:Anambra Poll: Nobody can stop APCsays Senator Oduah
Up Next

Count me out of new party formation – Sen. Maeba