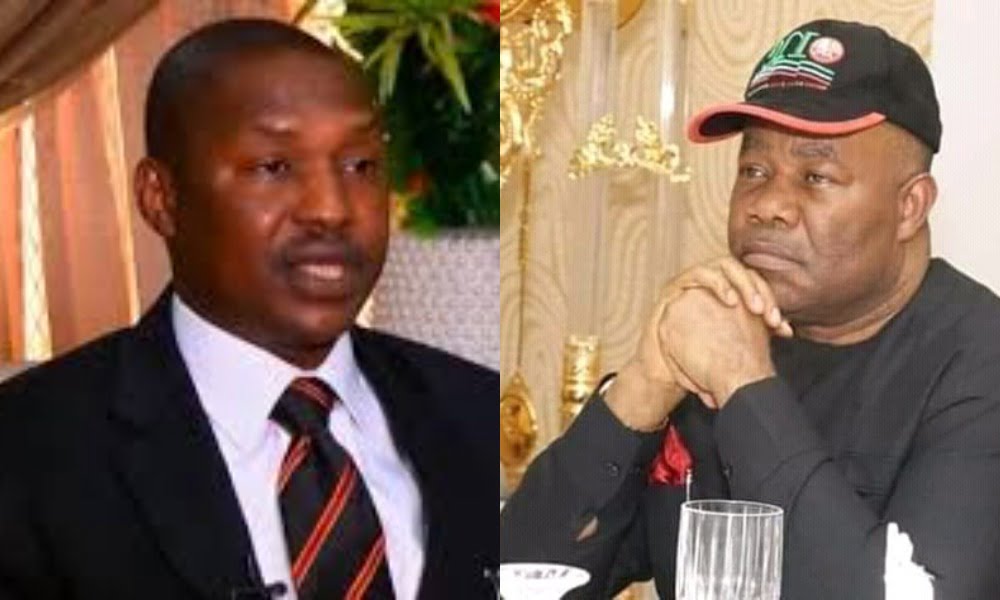 A highly placed source within the Niger Delta Development Commission (NDDC) has revealed how about N215.8 billion out of the total N307.9billion budget for the commission was shared between the Minister of Niger Delta Affairs, Godswill Akpabio, Attorney-General of the Federation and Minister of Justice, Abubakar Malami and phony contractors under different guises.

This comes as a fallout following the recent submission of the forensic audited report of the commission submitted penultimate week.

The highly placed source who craved anonymity revealed that contrary to Malami’s presentation, from about N307.9billion released for the commission, only N74.8billion was used for Personnel and recurrent expenditure.

N215.8Billion which accounts for the balance of the total sum was subsequently diverted to phony contracts including the servicing of the Minister of Justice, Malami for his services in protecting him (Akpabio.)

Our sources revealed that most of the companies that were paid from the N215billion for non existent emergency contracts are all cronies of the Minister of Niger Delta.

The list of the rogue companies and their owners are still being compiled by our investigative team.

The source added that the Justice Minister and his counterpart in the Niger Delta Affairs Ministry, Abubakar Malami and Godswill Akpabio respectively are taking the public for a ride.

In a release exclusively obtained by TrackNews Online, the source averred that rather than hold their offices in trust as leaders, they have resorted to perpetuating fraudulent activities while using the forensic auditors to cover up the actual rot in the commission while its perpetrators continue to spirit away public funds.

The source insisted that only way to clean the commission of the rot that has engulfed it, was to ensure the actual rule of law.

“The forensic auditors did not find the ‘real’ gaps, irregularities and due process violations/conflicts of interest. A cursory glance through reports from NDDC’s external audits and the Auditor-General of the Federation’s audits for 2016 to 2019, show alarms being raised about the uncontrolled issuance of emergency road and desilting contracts by Management of NDDC.

Other records show correspondence between BPP and NDDC, where BPP repudiates the emergency contracts, spelling out the penalties of infractions of the Procurement Act, to the Accounting Officer. Over N2 trillion worth of these emergency road rehabilitation contracts and desilting of waterways contracts have been issued, with up to N420 billion paid out to contractors with illegal emergency contracts, between 2017 and 2019. The payments never stopped and are still going on as you read this.

The source submitted that “In summary, the public is being taken for a ride. The custodians holding positions of responsibility on behalf of the people, have perpetuated a huge fraud, and the forensic auditors are being used to deflect public attention and to hide the crime, so that the masterminds at the heart of the criminal enterprise, can continue to exit the loot from the public treasury.

“The simplest solution to the situation is to ensure the actual rule of law. It is obvious past and present Management contributed immensely to the sorry state of the Commission, by breaking the law with impunity