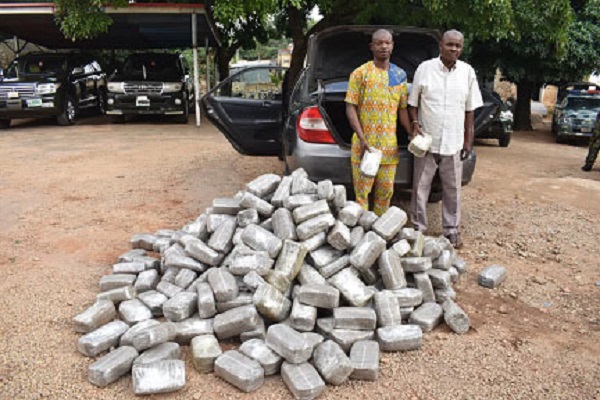 Babafemi said the youth corps member serving with a government agency in Abuja was arrested on August 28 following the interception of a consignment at the warehouse of a transport company.

He said the cakes were laced with Arizona, a strong variant of cannabis and some liquid.

He said another 1.08kg cannabis concealed in spray cans headed for Pakistan and 625grams of methamphetamine hidden in clothing headed for Australia were also seized.

The statement reads, “Across the states, operatives also intensified arrests of traffickers and seizures of illicit drugs. A total of 384.7kg of assorted narcotics being transported to the nation’s capital, Abuja, for sale were intercepted and seized at patrol points in Lokoja, Kogi State.

The consignment was concealed in a Toyota Camry car.

Takwa said the suspects, a retired police sergeant Patrick Kalu, 60, and Friday Kalu, 40, were arrested by OPSH troops during A stop-and-search operation at Manchok, Riyom Road.

The two men reportedly said they were contracted to convey the illicit substances from Ondo State to Yola, Adamawa State.

Also, Ignatius Ajuru University of Education Rumuolumini, Rivers State yesterday said it has suspended a 300-level student of the school identified as Newton Ezegbola Nsiegbe for allegedly peddling an illegal drug on campus.

“He was apprehended by the University Security Personnel in the hostel with over 1.75 grams of substance suspected to be Indian hemp which he smokes and sells to his colleagues on campus.

“He has been handed over to the NDLEA for further investigation. Meanwhile, the matter has been referred to the Students Disciplinary Committee to determine his fate as a student of the University.”

Related Topics:Corps member arrested over drugged cake import
Up Next