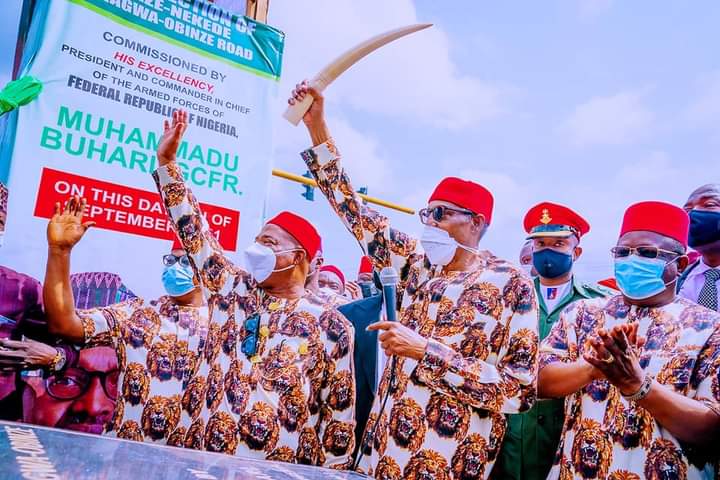 Owerri, the capital of Imo State, on Thursday once more wore the unenviable toga of a conquered city as residents stayed indoors in compliance with the sit-at-home order by the Indigenous People of Biafra (IPOB), taking the shine off the visit of President Mu­hammadu Buhari that was supposed to be greeted with glamour and fanfare. 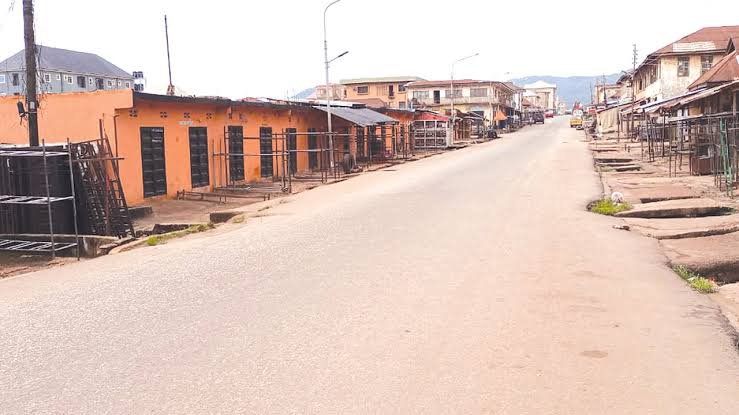 The sit-at-home compliance was total and unprecedented. The streets were empty. There was no movement of vehicles. Commercial activities were paralysed. Schools, banks, filling stations, hospitality industry, business centres all packed up.

The picture was the same in Orlu, Okigwe and Oguta.

Imo State is seen as the hub of the pro-Biafra group, IPOB’s operations in South- East. The agitation for the independent Republic for Biafra has led to killings and destruction of property in the South-East.

Nigeria Security and Civil Defence Corps (NSCDC) took over the roads and strategic junctions in Owerri and envi­rons as a military helicopter persistently hovered around Owerri municipality.

Others at the airport to welcome the president includ­ed some cabinet ministers and presidential aides from the South-East; Imo House of Assembly members; the Ex­ecutive Secretary of National Agricultural Land Develop­ment Authority (NALDA), Mr. Paul Ikonne, as well as other federal and state governments’ officials.

President Buhari was in Imo, on one-day official visit, where he inaugurated some de­velopmental projects executed by the state government.

At the commissioning of Egbeada bypass named after a prominent son of the state, Chief Emmanuel Iwuanyan­wu, the president said he was very impressed with the level of work done by the state gov­ernment.

“If there are no roads, if there is no security, what can people do? Absolutely nothing.

“I think I have to go back to the old saying that seeing is believing. I accepted this invi­tation to come and see what the governor wanted me to see.

“I had seen enough that jus­tifies his integrity in making sure that he is working very hard to make sure you get the structure necessary.

“I’m very impressed by what he had done because I have gone through the same prob­lem at the centre to make sure that infrastructure is what will enable the people to mind their own businesses.

“I am very pleased with what I have seen and I assure you that I will support Imo State within the constitution of the Federal Republic of Nigeria,” the president said.

Earlier, Uzodimma said, “Our commitment to the peace and unity of Nigeria is irrevo­cable. Through our inclusive government, we have accom­modated every Nigerian resi­dent in Imo State.

“Some have been appointed directly into my cabinet, oth­ers are making input into gov­ernance. Our aim is to build a mini-Nigeria in Imo State, where everyone will have a sense of not only belonging but unfettered accommodation.” 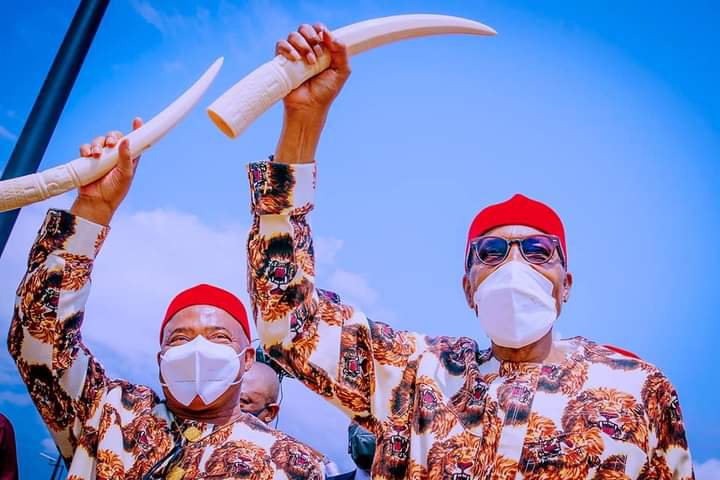 I Want To Be Remembered For Stabilising Nigeria— Buhari

President Buhari said that he would want to be remem­bered as the president who sta­bilised Nigeria in the area of security, economic prosperity and triumph over corruption.

The president, who spoke at the town hall meeting with South-East leaders, said with less than two years left in his eight-year tenure, security still remains a major priority for his administration.

“If there is no security, there is nothing anyone can do no matter how much you try or the initiative you have.

“Security is number one priority and then the economy. When people feel secure they will mind their own business,” he said.

The president told South- East leaders that since fighting corruption in Nigeria had be­come very sophisticated and difficult, he would continue to strive to leave a lasting legacy of integrity and accountability in the system.

“Nobody can accuse me of having companies or mansions anywhere in the country and I thank God that I try to keep myself as clean as possible, so that I cannot be taken hostage.

“I will do my best to ensure that Nigerians that try hard, succeed in their efforts,” he said.

On the forthcoming 2023 elections, the president reaf­firmed his commitment to free, fair and credible polls, urging the leaders to honestly educate their constituencies on the need to hold their elected representa­tives accountable.

Acknowledging the re­sourcefulness and enterprising spirit of Igbo people, the pres­ident said: “The fundamental thing about the Igbo people is that there is no town you will visit in Nigeria without seeing the Igbos being in-charge of either infrastructure or phar­maceutical industry.

“Therefore, it is unthink­able for me that any Igbo man would consider himself not to be a part of Nigeria.

“The evidence is there for ev­eryone to see that Igbos are in charge of Nigeria’s economy.” 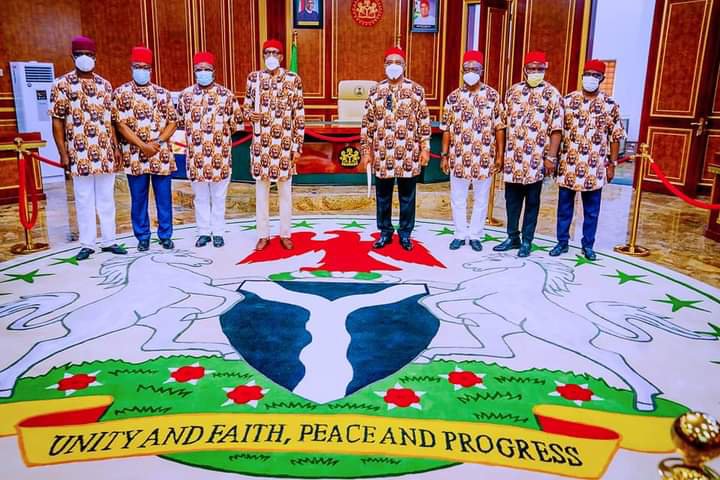 Noting that no country can make any meaningful progress without the development of in­frastructure, the president ex­pressed regret that successive governments at the federal level contributed to the decay of critical infrastructure in the country.

He promised that the Fed­eral Government would com­plete ongoing key projects in the South-East, including the 2nd Niger Bridge as well as the railway lines and routes linking the region with other parts of the country.

In his remarks at the town hall meeting, Governor Uzod­inma said Ndigbo believe in a united Nigeria predicated on ‘‘justice, equity and fairness.”

He thanked the president for addressing the interests of Ndigbo through deliberate policy initiatives designed to give the people a true sense of belonging, including the on­going construction of the 2nd Niger Bridge, among others.

Governor Uzodimma said the people of South-East would remain grateful to the president for approving the establishment of a Naval Base in Oguta Local Government Area of the state, adding that as time unfolds, the economic benefits of the base would manifest.

In his remarks, the Presi­dent-General, Ohaneze Ndigbo Worldwide, Prof. George Obio­zor, assured the president of the continuous support of Ndigbo.

“Ndigbo are committed to Nigerian unity and there is news for those trying to push us out of Nigeria.

“Ndigbo in Nigeria are like fish in the ocean and no mat­ter how rough the storm is, it cannot drive the fish out of the ocean.

“Mr. President, it is in this context, that we see a new dawn in your distinguished presence in Igbo land and believe that on your return to Abuja the signif­icance and substance of this visit will form new foundation of a platform for meaningful dialogue on critical issues of concern to the Igbo nation,” he said.

Meanwhile, shops, markets, banks, motor parks and other private and public institutions in Abia State were shut down on Thursday in compliance with the sit-at-home order called by IPOB.

People and vehicles were off the streets as few tricycles (keke) on the streets were seen moving empty.

The commercial city of Aba was completely shut down, just as Umuahia, the state capital. Even security personnel were equally off the streets because of the calmness the towns.

Some of those interviewed by our correspondent said they were afraid to come out for fear of being attacked by the unscrupulous hoodlums pos­ing as IPOB members or even security personnel.

Similarly, in Enugu, com­mercial activities were crippled again as shops, banks, schools and offices were under lock and key.

It was learnt that only few shops along the streets were open while major markets in the state remained closed.

Commercial buses were also not seen on the roads except few keke riders plying some not busy areas in the state.

Daily Independent reports that security personnel were at different strategic areas of the state capital to avert breakdown of law and order. 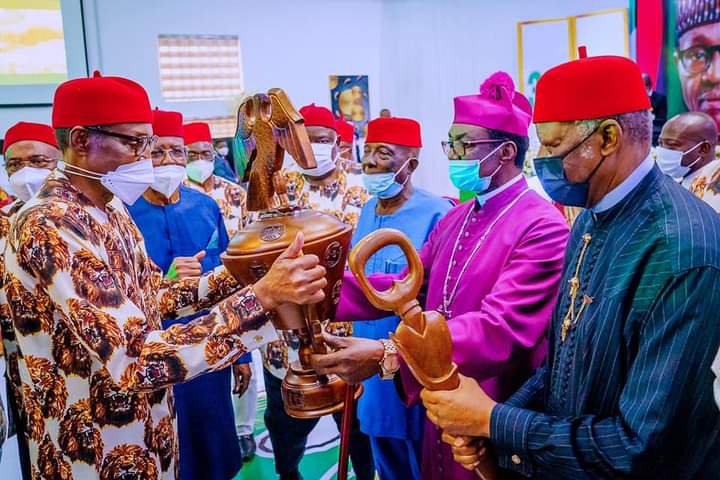 Related Topics:Empty Owerri Streets Take The Shine Off Buhari's Visit
Up Next

Buhari to doctors: Striking at this critical time isn’t a good decision