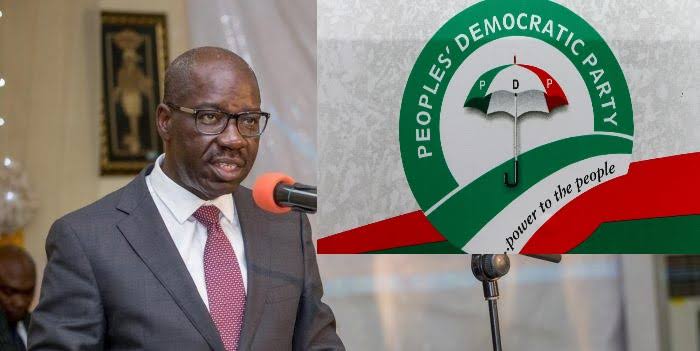 As controversy continues to trail Governor Godwin Obaseki’s refusal to name his cabinet almost a year after his re-election, details have emerged on why the Edo State governor has chosen to bide his time.

Recall that following his disqualification during the screening of governorship aspirants for the 2020 governorship election over discrepancies in his certificate in All Progressives Congress (APC), Obaseki had defected the Peoples Democratic Party (PDP).

Obaseki who was first elected in 2016 on the platform of the APC was reportedly pushed out of the party by the former National Chairman of the party, Comrade Adams Oshiomhole.

But since his swearing in for a second term on November 12, 2020, Obaseki is yet to appoint commissioners and other aides.

The Edo state Governor has only appointed the Secretary to the State Government (SSG), Chief of Staff and a few aides.

This has however caused dissatisfaction among members of the PDP in Edo State who are expecting to be appointed into the Governor’s cabinet.

Sources within the now ruling party told Naija News on Friday night that PDP leaders failed to negotiate properly with Obaseki before giving him the party ticket.

While stating that the Edo governor allegedly paid billions to secure the party’s ticket in 2020, a source, who is an ‘old member’ of the PDP, stated that party leaders should have used that opportunity to negotiate for positions with Obaseki who was desperate at that time.

The source accused the Tony Aziegbemi-led PDP State Working Committee (SWC) and his predecessor of not negotiating political positions properly.

“When Obaseki dangled huge amount of money before them they forgot about negotiating positions before the election,” the source alleged.

“They are now expecting to hold Obaseki to ransom with appointments after they had collected the money.”

The source disclosed that Obaseki’s delay in naming his commissioners and aides is connected to PDP leaders’ push to get juicy appointments after allegedly receiving huge amount of money to hand over their guber ticket.

On if the delay in constituting the cabinet may be giving Obaseki a bad name, as many may see him as being too bossy, another source told Naija News that the governor “doesn’t care.”

“Members of the APC close to the governor had hinted on his character before his defection.

“Someone who clashed with a lot of people while looking for his second term ticket, what do you expect now that he has gotten it?” he asked.

The source revealed that some key men close to the governor who served during his first-time and were members of the APC are still active in running the administration.

According to the source, Governor Obaseki might make sure only those that defected with him to the PDP get all the juicy position when he finally decides to name his cabinet.

On if Obaseki may leave the PDP, the source stated that the governor is not plotting to leave the party but if he does the only losers will be the PDP.

“They have shown that all they care about is just the money. They would lose if Obaseki or Deputy Governor Philip Shaibu leaves the party,” he added.

Recall that reports had emerged on Monday claiming Deputy Governor Philip Shaibu had perfected plans to dump the PDP.

According to reports, marathon meetings were held outside the country last week between the Edo Deputy Governor and some party bigwigs in the country ahead of his planned defection

“Philip Shaibu is one man I admire as a political tactician and Maradona in the Edo political space. Quitting PDP may frustrate the developmental plans of the Obaseki’s administration due to his nuts and bolts experience as a voracious student of politics, as well as his sterling track record and pedigree as a fearless and charismatic lawmaker,” a source had to Vanguard.

According to the source, there are strong indications that the Deputy Governor may not join any other political party immediately after quitting the PDP.

But in an interview with NaijaNews, the Chief Press Secretary (CPS) to the Deputy Governor, Comrade Ebomhiana Musa, denied the report.

While admitting that Philip Shaibu travelled abroad for his vacation, Musa said his principal only spent time with his family.

According to him, the reports of his defection were only the figment of the authors imagination.

2023: What Jonathan Will Give Tinubu For APC Presidential Ticket – Sokoto Rep