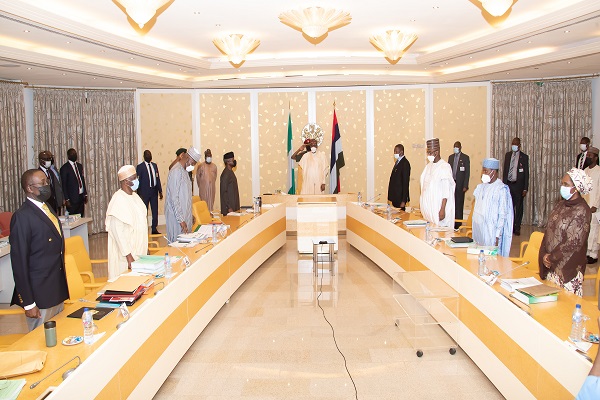 The Federal Executive Council (FEC) approved contracts about N89.6 billion for projects in the Ministry of Works and Housing, as well as that of aviation.

This was disclosed to State House Correspondents after the week’s virtual FEC meeting presided over by President Muhammadu Buhari at the Presidential Villa, Abuja.

The Federal Executive Council (FEC) on Wednesday approved about N89.6 billion worth of contracts for award under the ministries of Works and Housing as well as Aviation.

The post-FEC briefing was addressed by the Minister of Works and Housing, Babatunde Fashola (SAN); the Special Adviser to the President on Media and Publicity, Femi Adesina; and Minister of Humanitarian Affairs Disaster Management, Social Development counterpart, Hajiya Sadiya Umar Farouk.

Speaking about the approvals secured by the Federal Ministry of Works and Housing, Fashola said contract for the dualisation of the Odukpani-Itu-Ikot Ekpene Road was granted at the cost of N79.649 billion.

He explained that the approved contract is in relation to the section from Oku Iboku Power Plant to Abak, which is about 26 kilometres in length.

“The Ministry of Works and Housing presented the memorandum for the completion of the dualization of the Odukpani-Itu-Ikot Ekpene road. And this is in relation to the section from Oku Iboku Power Plant to Abak of about 26 kilometre stretch.

“Council approved the award to Messers Sematech Nigeria Ltd for N79.649 billion to be executed over 16 months.

“So, this will help complete the dualisation gaps between the one awarded to Julius Berger and the section awarded to CCECC. When this is done, motorists in that area will now have an option of the dual carriageway instead of the existing single carriageway.

“And this is in recognition of the heavy cargo that passes through that area from the south-south through to the north central, Benue through Katsina Ala through to the south east to Abia. It’s very important trade link for the country.”

Part of the road project had in 2020 been awarded at the close of N54 billion.

Asked to give an update on the 2020 contract award for the same project, Fashola regretted that there had been paucity fund to implement the project.

Fashola blamed the collapse of a section of the Lokoja-Kabba road on natural causes, stating “as we go through the rainy season, this is the context in which to locate the Lokoja-Kabba. It’s a failure caused by nature and aging. And, again, an opportunity to share with you what we have. We expect that these things will happen, but we don’t know where it will happen every time.”

While noting that his ministry was often unable to respond to such failures, he called for the setting up of a contingency maintenance fund, which he said should have a sizable amount.

2023: Making sense of the power calculus