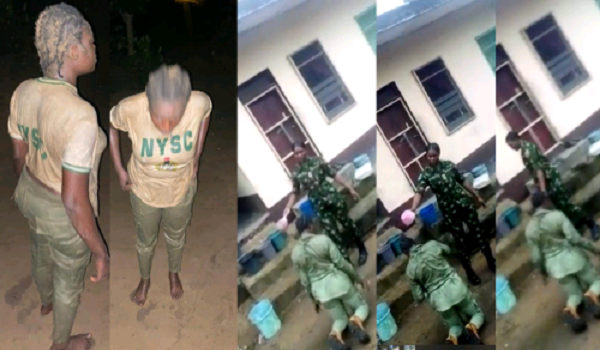 A National Youth Service Corps (NYSC) member, Ezeiruaku Ifeyinwa Fidelis, who was allegedly assaulted by a female Army officer of 13 Brigade Command Calabar, Lt. Chika Viola Anele, has explained what transpired between them.

The Army last week said it was embarrassed by the incident, and apologised for it.

Ezeiruaku was seen in a 32-second clip kneeling while the soldier, Anele, kept scooping what looked like dirty water and then pouring it all over her

The video ended with the soldier slapping the Corps member.

Explaining her ordeal in an interview with BBC Pidgin, obtained by The Nation stated that the female army officer mixed sand with water and poured the mixture on her because they had an argument over ‘small chops’.

She said: “The issue started when the Commander of the brigade at Army barracks hosted a competition so I was selected as an usher for guests.

“When I got there, I saw one of my friends, an officer that I played Ayo game with. As I was greeting him, Lieutenant Chika Anele came and shouted at me that I could not touch an officer who is in army uniform. As she said that to me, I drew back and returned to my duty post.

“On July 28, a message was sent via WhatsApp that Lieutenant Chika invited corps members to a meeting. I didn’t see the message initially but I went to the meeting and when I got there, she brought me out and said it was because of me she called the meeting and asked me to go and wear my NYSC uniform.

“When I got to my room, I saw that I was already menstruating and I needed to clean up so I could dress properly. As I was having my bath, she sent someone to come and check what I was doing, the person told her I was bathing.

“She called all the corps members and asked some to fetch water in a bucket and she took me to the backyard, back of the corps members’ lodge. She said I should do “press up, frog jump and all.”

“As I was doing the frog-jump, she asked me to kneel, then asked some corps members to bring stones and asked me to carry them on my head. She said it was when she saw tears dropping from my eyes that she would release me.”

Related Topics:Female soldier forced me to carry stonessays Corps member
Up Next

“I gave him my ATM card and he prayed on it for financial breakthrough” – Actress,