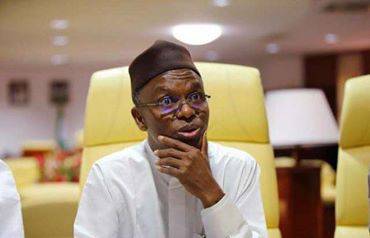 Kaduna State Governor, Nasir El-Rufai couldn’t deliver his polling unit in the local government election that held in the state on Saturday.

This is as the opposition Peoples Democratic Party (PDP) defeated El-Rufai’s All Progressives Congress (APC) in both the chairmanship and councillorship elections in his polling unit.

TrackNews Online reports that El-Rufai voted in the Polling Unit 001 Ungwar Sarki, Kaduna North local government area where he said his aim is to deliver the unit and win the entire election for the All Progressives Congress (APC).

However, the PDP won the polling unit when the results were announced by the Presiding Officer of the Unit, Muhammad Sani.

According to the results declared, APC polled 62 votes in the chairmanship election while PDP got 86 votes out of the 159 votes cast.

In the councillorship election, APC got 53 votes while PDP emerged victorious with 100 votes out of 162 total votes cast.

Speaking earlier while casting his vote on Saturday, El-Rufai had said the people will be allowed to determine who they want as leaders as there will be no government interference in the election.

He promised to deliver a credible election devoid of cheating and rigging.

“We are not going to behave like other parties or other state government of the ruling party. We will allow the people of Kaduna State to elect who they want.

“Technology is key to minimizing cheating in election, unless we have credible election we can never have good leaders, accountable leaders and that is why we are committed, even if it means we are going to lose in some areas, this is democracy, it is a gradual process,” he said.

TrackNews Online reports however that the overall results of the Kaduna North Local Government were yet to be declared at the time this report was filed.

Elections were held in 19 out f the 23 local government areas in the state as elections couldn’t hold in the remaining four local governments due to security challenges.

Related Topics:Kaduna LG Election: PDP Defeats El-Rufai In His Polling Unit
Up Next