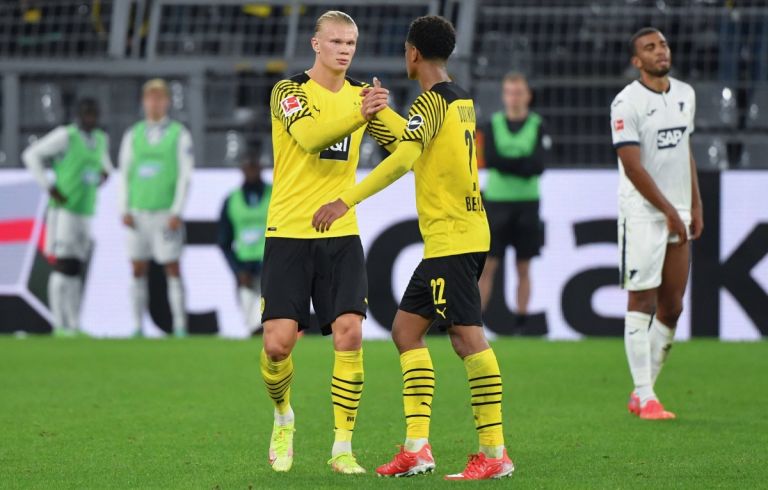 Manchester United, Liverpool and Chelsea are reportedly among the clubs to have been in ‘regular contact’ with Borussia Dortmund over a potential future transfer deal for wonderkid Jude Bellingham.

The 18-year-old is widely considered to be one of the most exciting young talents in Europe at the moment, having shone in his time in the Bundesliga after initially catching the eye with former club Birmingham City.

It seems inevitable that Bellingham will earn a big move at some point, and 90min claim that the Premier League’s giants are all showing a great deal of interest in signing him.

The report names Man Utd, Liverpool, Chelsea and Man City as being in frequent contact over the England international, who has also been linked as a top target for Chelsea by Eurosport in the past, who added that he might already cost as much as £100million.

90min suggest Dortmund are not ready to sell Bellingham yet, and that makes sense as they’ve just lost Jadon Sancho to United this summer, while Erling Haaland is also likely to attract suitors very soon.

Still, they’re sure to find it hard to keep hold of Bellingham as well, with the teenager looking an ideal purchase for the clubs mentioned.

United would surely benefit from landing the former Birmingham youngster as an upgrade on players like Fred in the middle of the park, and they should have a decent relationship with Dortmund after just signing Sancho from them this summer.

Liverpool could quite likely see Bellingham as an ideal long-term replacement for club captain Jordan Henderson, while midfield is also a bit of an issue for Jurgen Klopp after the lack of impact of Thiago Alcantara, Naby Keita and Alex Oxlade-Chamberlain in that area of the pitch, while Georginio Wijnaldum is yet to be replaced after leaving for Paris Saint-Germain this summer.

Chelsea, meanwhile, have been building an exciting young team around academy graduates like Mason Mount and Reece James, whilst also signing top talent like Christian Pulisic and Kai Havertz, so Bellingham could fit in well.

The Blues have just signed Saul on loan in that department, but there’s no guarantee he’ll stay permanently, so looking at Bellingham as an alternative in the future makes sense.

Related Topics:Liverpool & Chelsea in regular contact over potential £100m transferMan United
Up Next